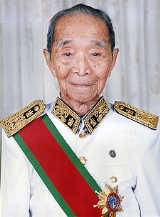 Encyclopedia
Chau Sen Cocsal also known as “Chhum”, was a Cambodian civil servant and politician. He is also the longest lived former head of government in history.

Chhum, an ethnic Khmer, was born in Southern Vietnam in the City of Tri-Ton, Chaudoc Province, on 1 September 1905. He belongs to the Khmer Krom
Khmer Krom
The Khmer Krom are Khmer people living in the Mekong Delta and the Lower Mekong River area. Under the Khmer Rouge regime- according to the conservative estimates are that 150,000. Under the rule of Vietnam from 1979-93, Cambodia may have lost 20,000 Khmer Krom...
ethnic group, that is, indigenous Khmer people living in the Mekong Delta.

At the age of 21, Chhum became the first Cambodian to graduate from the Lycée Chasseloup Laubac in Saigon, with a baccalaureate in French and hilosophy. Upon graduation, he began a career in the French Colonial Administration in Phnom Penh, Cambodia, with the position of Second Class Civil Servant (Cadre Supérieur de Deuxième Classe / Anuk Montrei).

In 1928, Chau Sen Cocsal was promoted Deputy Governor of Takeo Province (Gouverneur Adjoint), then successively posted in Tralach District, Takeo Province, in 1931 and Thbaung Khmaum, Kompong Cham Province, in 1935. In 1938, Chhum became Governor of Svay Rieng Province. From 1940 to 1944, he was Governor of Kompong Chhnang Province. During World War II, Chhum refused to supply forced labour to the Japanese occupying forces in Cambodia and joined resistance in the jungle.

With the return of the French Administration, Chhum was nominated Mayor of Phnom Penh in 1945, Governor of Kompong Cham Province in 1946, then Governor of Kandal Province in 1948. In 1951, Chhum was sent to Thailand, as Cambodia’s first ambassador to a foreign country. Chhum returned to Cambodia in 1952 and once more took to the jungle to fight for the country’s independence from France.

In 1955, Chau Sen Cocsal was elected to the Cambodian National Assembly as deputy of Kompong Cham Province. From 1958 to 1963, he occupied the position of President of the National Assembly. In 1969, at the age of 64, Chhum retired from public office.

In April 1975, after the fall of Phnom Penh to the Khmer Rouge
Khmer Rouge
The Khmer Rouge literally translated as Red Cambodians was the name given to the followers of the Communist Party of Kampuchea, who were the ruling party in Cambodia from 1975 to 1979, led by Pol Pot, Nuon Chea, Ieng Sary, Son Sen and Khieu Samphan...
and Saigon to North Vietnamese troops, as Chau Sen Cocsal was visiting relatives in Kampuchea Krom, he was arrested by Vietnamese authorities. Charged with spying for the US Central Intelligence Agency, Chhum was incarcerated for 17 months in what he would later describe as a “chicken box” then in a room where he took turns sleeping with 40 other prisoners . Chau Sen Cocsal spent an additional two years under house arrest in Saigon. Under the pressure of France, Vietnam released Chhum, who was allowed to migrate to France with his wife.

In 1991, following the signature of the Paris Peace Agreements, King Norodom Sihanouk
Norodom Sihanouk
Norodom Sihanouk regular script was the King of Cambodia from 1941 to 1955 and again from 1993 until his semi-retirement and voluntary abdication on 7 October 2004 in favor of his son, the current King Norodom Sihamoni...
nominated Chau Sen Cocsal Chhum as President of Cambodia’s Supreme National Council (SNC). From 1992 onwards, he became High Privy Advisor of King Norodom Sihanouk. In 1993, Chau Sen Cocsal Chhum was awarded the highest rank in Cambodia’s civil service, “Samdech”. The same year, he became Dean of the Constitutional Council. Le Monde
Le Monde
Le Monde is a French daily evening newspaper owned by La Vie-Le Monde Group and edited in Paris. It is one of two French newspapers of record, and has generally been well respected since its first edition under founder Hubert Beuve-Méry on 19 December 1944...
correspondent, Jean-Claude Pomonti, in a personal interview, quoted Chau Sen Cocsal as having “little affinity with the current Cambodian regime”, assessing that its leadership “had almost sold Cambodia to the Vietnamese” . Chhum retired a second time from public office in 2007. His decorations include Grand Croix de l'Ordre Royal (Cambodia) and Commandeur de la Légion d'Honneur
Légion d'honneur
The Legion of Honour, or in full the National Order of the Legion of Honour is a French order established by Napoleon Bonaparte, First Consul of the Consulat which succeeded to the First Republic, on 19 May 1802...
(France).

On 22 January 2009, at the age of 103, Cambodia’s last remaining civil servant from the French Administration, and the Sangkum Reastr Niyum, died peacefully, surrounded by his family. Chau Sen Cocsal Chhum was publicly cremated with full military guard and honour. He was saluted by official communiqués by King Father Norodom Sihanouk , King Norodom Sihamoni
Norodom Sihamoni
Norodom Sihamoni is the current reigning King of Cambodia. He is the eldest son of Norodom Sihanouk and Norodom Monineath Sihanouk. Previously Cambodia's ambassador to UNESCO, he was named by a nine-member throne council to become the next king after his father Norodom Sihanouk abdicated in 2004...
, France’s Ministry of Foreign Affairs, and the Khmer Krom community. In an obituary published in the Phnom Penh Post
Phnom Penh Post
The Phnom Penh Post is a daily English-language newspaper published in Phnom Penh, Cambodia. Founded in 1992 by publisher Michael Hayes, it is Cambodia's oldest English-language newspaper. It is printed in full-color tabloid format. The Phnom Penh Post is also available in Khmer language...
, his family wrote that Chhum should be remembered as “a man considerate of the rights of others, small or tall”, who “always had kind words for the anonymous faces tirelessly serving the high and mighty. For Samdech Chhum thought of himself as a mere servant.” A few years before his passing, Chhum had already asked his grandson to convey his apologies to the population of Phnom Penh for the traffic congestion that his long funeral cortege would cause. “To have served dutifully and unfailingly was his greatest pride.”
The source of this article is wikipedia, the free encyclopedia.  The text of this article is licensed under the GFDL.