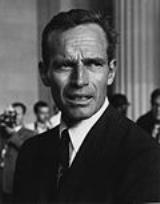 Overview
Charlton Heston was an American actor of film, theatre and television. Heston is known for heroic roles in films such as The Ten Commandments
The Ten Commandments (1956 film)
The Ten Commandments is a 1956 American epic film that dramatized the biblical story of the Exodus, in which the Hebrew-born Moses, an adopted Egyptian prince, becomes the deliverer of the Hebrew slaves. The film, released by Paramount Pictures in VistaVision on October 5, 1956, was directed by...
, Ben-Hur
Ben-Hur (1959 film)
Ben-Hur is a 1959 American epic film directed by William Wyler and starring Charlton Heston in the title role, the third film adaptation of Lew Wallace's 1880 novel Ben-Hur: A Tale of the Christ. The screenplay was written by Karl Tunberg, Gore Vidal, and Christopher Fry. The score was composed by...
for which he won the Academy Award for Best Actor
Academy Award for Best Actor
Performance by an Actor in a Leading Role is one of the Academy Awards of Merit presented annually by the Academy of Motion Picture Arts and Sciences to recognize an actor who has delivered an outstanding performance while working within the film industry...
, El Cid
El Cid (film)
El Cid is a historical epic film, a romanticized story of the life of the Christian Castilian knight Don Rodrigo Díaz de Vivar, called "El Cid" who in the 11th century fought the North African Almoravides and ultimately contributed to the unification of Spain.Made by Samuel Bronston Productions in...
, and Planet of the Apes
Planet of the Apes (1968 film)
Planet of the Apes is a 1968 American science fiction film directed by Franklin J. Schaffner, based on the 1963 French novel La Planète des singes by Pierre Boulle. The film stars Charlton Heston, Roddy McDowall, Kim Hunter, Maurice Evans, James Whitmore, James Daly and Linda Harrison...
. He also is well known for his roles in the films The Greatest Show on Earth
The Greatest Show on Earth
The Greatest Show on Earth is a 1952 drama film set in the Ringling Bros. and Barnum & Bailey Circus. The film was produced, directed, and narrated by Cecil B. DeMille, and won the Academy Award for Best Picture...
and Touch of Evil
Touch of Evil
Touch of Evil is a 1958 American crime thriller film, written, directed by, and co-starring Orson Welles. The screenplay was loosely based on the novel Badge of Evil by Whit Masterson...
.

Heston was also known for his political activism. In the 1950s and 1960s he was one of a handful of Hollywood actors to speak openly against racism and was an active supporter of the Civil Rights Movement.

I simply cannot stand by and watch a right guaranteed by the Constitution of the United States come under attack from those who either can't understand it, don't like the sound of it, or find themselves too philosophically squeamish to see why it remains the first among equals: Because it is the right we turn to when all else fails. That's why the Second Amendment is America's first freedom.

Now, I doubt any of you would prefer a rolled up newspaper as a weapon against a dictator or a criminal intruder. Yet in essence, that is what you have asked our loved ones to do, through an ill-contrived and totally naive campaign against the Second Amendment.

I always work on the theory that the audience will believe you best if you believe yourself. This meant that I had to come to understand Moses well enough to believe in my portrayal of him.