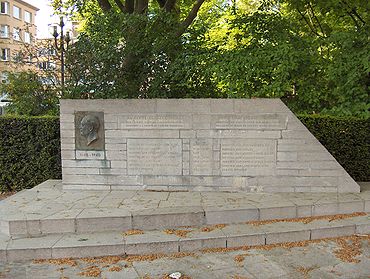 Charles Marie Pierre Albert, Count de Broqueville (4 December 1860–5 September 1940 in Brussels
Brussels
Brussels , officially the Brussels Region or Brussels-Capital Region , is the capital of Belgium and the de facto capital of the European Union...
) was the 20th Prime Minister of Belgium, serving during World War I
World War I
World War I , which was predominantly called the World War or the Great War from its occurrence until 1939, and the First World War or World War I thereafter, was a major war centred in Europe that began on 28 July 1914 and lasted until 11 November 1918...
. He was born in Postel, Belgium
Belgium
Belgium , officially the Kingdom of Belgium, is a federal state in Western Europe. It is a founding member of the European Union and hosts the EU's headquarters, and those of several other major international organisations such as NATO.Belgium is also a member of, or affiliated to, many...
. He was the leader of Belgium's Catholic Party
Catholic Party (Belgium)
The first Catholic Party in Belgium was established in 1869 as the Confessional Catholic Party .-History:In 1852 a Union Constitutionelle et Conservatrice was founded in Ghent, in Leuven , and in Antwerp and Brussels in 1858, which were active only during elections...
, and he served as prime minister between 1911 and 1918. Once it became clear that Germany
Germany
Germany , officially the Federal Republic of Germany , is a federal parliamentary republic in Europe. The country consists of 16 states while the capital and largest city is Berlin. Germany covers an area of 357,021 km2 and has a largely temperate seasonal climate...
intended to violate Belgian neutrality in August 1914, he oversaw Belgium's mobilization for war.

Despite this mobilization, de Broqueville opposed King Albert I's proposal to deploy the Belgian Army
Belgian Army
The Land Component is organised using the concept of capacities, whereby units are gathered together according to their function and material. Within this framework, there are five capacities: the command capacity, the combat capacity, the support capacity, the services capacity and the training...
along the German frontier in 1914 — instead strategically placing them throughout the country. He recognized that wartime support for Belgium depended upon its continued status as a non-provocative neutral power.

The German invasion of 1914 forced the Belgian government into exile at Le Havre
Le Havre
Le Havre is a city in the Seine-Maritime department of the Haute-Normandie region in France. It is situated in north-western France, on the right bank of the mouth of the river Seine on the English Channel. Le Havre is the most populous commune in the Haute-Normandie region, although the total...
. De Broqueville fought the king on the neutrality issue — thereby denying Belgium a full alliance with the Allied forces
Allies of World War I
The Entente Powers were the countries at war with the Central Powers during World War I. The members of the Triple Entente were the United Kingdom, France, and the Russian Empire; Italy entered the war on their side in 1915...
.

This opposition of the king critically weakened de Broqueville's stance among members of his cabinet. Consequently, he resigned as Foreign Secretary in January 1918 and as Prime Minister in May when he lost the support of his own party.