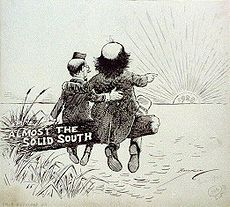 Charles Wayland Bryan was the younger brother of perennial U.S.
United States
The United States of America is a federal constitutional republic comprising fifty states and a federal district...
Democratic
Democratic Party (United States)
The Democratic Party is one of two major contemporary political parties in the United States, along with the Republican Party. The party's socially liberal and progressive platform is largely considered center-left in the U.S. political spectrum. The party has the lengthiest record of continuous...
presidential candidate William Jennings Bryan
William Jennings Bryan
William Jennings Bryan was an American politician in the late-19th and early-20th centuries. He was a dominant force in the liberal wing of the Democratic Party, standing three times as its candidate for President of the United States...
, with whom he shares the distinction of being the only set of brothers to be nominated for national office by a major party.

Born in 1867 in Salem, Illinois
Salem, Illinois
Salem is a city located in the U.S. state of Illinois. It is the county seat of Marion County. The population was 7,485 at the 2010 census.Salem is the birthplace of William Jennings Bryan and his brother vice presidential candidate Charles W. Bryan, the G. I. Bill of Rights, and Miracle Whip salad...
, Bryan served as mayor of Lincoln, Nebraska
Lincoln, Nebraska
The City of Lincoln is the capital and the second-most populous city of the US state of Nebraska. Lincoln is also the county seat of Lancaster County and the home of the University of Nebraska. Lincoln's 2010 Census population was 258,379....
from 1915 to 1917, and again from 1935 to 1937, and as the 20th and 23rd Governor of Nebraska
Governor of Nebraska
The Governor of Nebraska holds the "supreme executive power" of the State of Nebraska as provided by the fourth article of the Nebraska Constitution. The current Governor is Dave Heineman, a Republican, who assumed office on January 20, 2005 upon the resignation of Mike Johanns . He won a full...
from 1923 to 1925 and again from 1931 to 1935. He was an unsuccessful candidate for governor in 1926, 1928, and 1938. 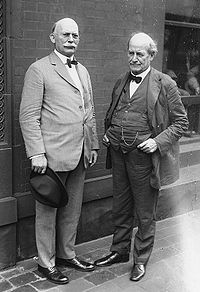