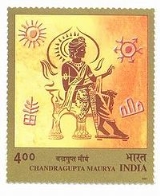 Overview
Chandragupta Maurya (born c. 340 BCE, ruled c. 320 BCE, – 298 BCE) was the founder of the Maurya Empire
Maurya Empire
The Maurya Empire was a geographically extensive Iron Age historical power in ancient India, ruled by the Mauryan dynasty from 321 to 185 BC...
. Chandragupta succeeded in conquering most of the Indian subcontinent
Indian subcontinent
The Indian subcontinent, also Indian Subcontinent, Indo-Pak Subcontinent or South Asian Subcontinent is a region of the Asian continent on the Indian tectonic plate from the Hindu Kush or Hindu Koh, Himalayas and including the Kuen Lun and Karakoram ranges, forming a land mass which extends...
. Chandragupta is considered the first unifier of India and its first genuine emperor. In foreign Greek
Greek language
Greek is an independent branch of the Indo-European family of languages. Native to the southern Balkans, it has the longest documented history of any Indo-European language, spanning 34 centuries of written records. Its writing system has been the Greek alphabet for the majority of its history;...
and Latin
Latin
Latin is an Italic language originally spoken in Latium and Ancient Rome. It, along with most European languages, is a descendant of the ancient Proto-Indo-European language. Although it is considered a dead language, a number of scholars and members of the Christian clergy speak it fluently, and...
accounts, Chandragupta is known as Sandrokyptos (Σανδρόκυπτος), Sandrokottos (Σανδρόκοττος) or Androcottus.

Prior to Chandragupta's consolidation of power, small regional kingdoms dominated the northwestern subcontinent, while the Nanda Dynasty
Nanda Dynasty
The Nanda Empire originated from the region of Magadha in Ancient India during the 5th and 4th centuries BC. At its greatest extent, the Nanda Empire extended from Bengal in the east, to Punjab in the west and as far south as the Vindhya Range...
dominated the middle and lower basin of the Ganges.

Who did Chandragupt marry, and when?

Who was he ruled by?
More
x