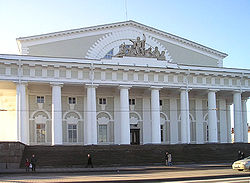 Central Naval Museum is one of the oldest Russia
Russia
Russia or , officially known as both Russia and the Russian Federation , is a country in northern Eurasia. It is a federal semi-presidential republic, comprising 83 federal subjects...
n museums and one of the world's largest naval museums.

The museum's history officially started in 1709 with the foundation of Model-kammer by Peter the Great for the conservation of ship drafts and models.

Since 1924, the museum has been known by its current name.