Encyclopedia
Central Memorial Park is a park located in central Calgary's Beltline district. Sometimes referred to as Central Park or as Memorial Park, the area is home to the Memorial Park Library
Calgary Public Library
The Calgary Public Library is a distributed library system featuring 17 branch locations including the Central Library. It is the second most used system in Canada...
, an equestrian statue of R.L. Boyle, and a cenotaph
Cenotaph
A cenotaph is an "empty tomb" or a monument erected in honour of a person or group of people whose remains are elsewhere. It can also be the initial tomb for a person who has since been interred elsewhere. The word derives from the Greek κενοτάφιον = kenotaphion...
. The former Colonel Belcher veterans hospital was located across 4th street SW to the West, now the site of the Sheldon M. Chumir Centre
Sheldon M. Chumir Centre
The Sheldon M. Chumir Centre is a health centre located in Calgary, Alberta. The facility is administered by the Calgary Zone of Alberta Health Services...
. 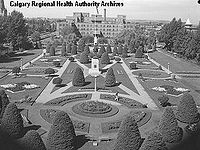 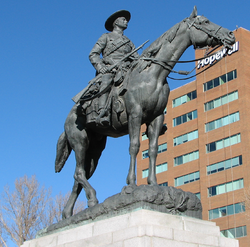 The statue of R.L. Boyle is unusual in that his name is not inscribed on the monument. Rather than memorializing him personally, the statue is intended as a tribute to all Albertans who fought in the Second Boer War
Second Boer War
The Second Boer War was fought from 11 October 1899 until 31 May 1902 between the British Empire and the Afrikaans-speaking Dutch settlers of two independent Boer republics, the South African Republic and the Orange Free State...
, and the dates 1899-1902 are inscribed on the pedestal.

Annual civic wreath laying commemorating Remembrance Day
Remembrance Day
Remembrance Day is a memorial day observed in Commonwealth countries since the end of World War I to remember the members of their armed forces who have died in the line of duty. This day, or alternative dates, are also recognized as special days for war remembrances in many non-Commonwealth...
occur on November 11. ANZAC Day
ANZAC Day
Anzac Day is a national day of remembrance in Australia and New Zealand, commemorated by both countries on 25 April every year to honour the members of the Australian and New Zealand Army Corps who fought at Gallipoli in the Ottoman Empire during World War I. It now more broadly commemorates all...
is also commemorated annually each April at the cenotaph.
The source of this article is wikipedia, the free encyclopedia.  The text of this article is licensed under the GFDL.