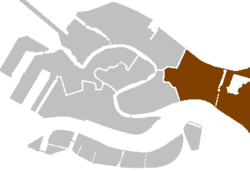 Castello is the largest of the six sestieri of Venice
Venice
Venice is a city in northern Italy which is renowned for the beauty of its setting, its architecture and its artworks. It is the capital of the Veneto region...
, Italy. The district grew up from the thirteenth century around a naval
Navy
A navy is the branch of a nation's armed forces principally designated for naval and amphibious warfare; namely, lake- or ocean-borne combat operations and related functions...
dockyard on what was originally the Isole Gemini, although there had been small settlements of the islands of San Pietro di Castello (for which the sestiere is named), also called Isola d'Olivolo, since at least the eighth century.

The district became divided between the Arsenale, then the largest naval complex in Europe, and the monasteries
Monastery
Monastery denotes the building, or complex of buildings, that houses a room reserved for prayer as well as the domestic quarters and workplace of monastics, whether monks or nuns, and whether living in community or alone .Monasteries may vary greatly in size – a small dwelling accommodating only...
in the north of the quarter. It was later altered by Napoleon, who planned what are now the Bienniale Gardens, and still more recently the island of Sant'Elena
Sant'Elena
Sant'Elena is an island of Venice. It lies at the eastern tip of the main island group and forms part of sestiere of Castello. The original island was separated by an arm of the Venetian Lagoon from Venice itself, and was centred on the Church of Sant'Elena and its monastery, originally built in...
has been created, and land drained at other extremities of the quarter.