Encyclopedia
Carpooling is the sharing of car
Automobile
An automobile, autocar, motor car or car is a wheeled motor vehicle used for transporting passengers, which also carries its own engine or motor...
journeys so that more than one person travels in a car.

By having more people using one vehicle, carpooling reduces each person's travel costs such as fuel costs
Gasoline and diesel usage and pricing
The usage and pricing of gasoline results from factors such as crude oil prices, processing and distribution costs, local demand, the strength of local currencies, local taxation, and the availability of local sources of gasoline...
, toll
Toll
The word toll has several meanings.Road transportation infrastructure* "Toll" is sometimes used as a synonym for tariff** Toll road, a road for which road usage tolls are charged...
s, and the stress of driving. Carpooling is also seen as a more environmentally friendly and sustainable way to travel as sharing journeys reduces carbon emissions, traffic congestion
Traffic congestion
Traffic congestion is a condition on road networks that occurs as use increases, and is characterized by slower speeds, longer trip times, and increased vehicular queueing. The most common example is the physical use of roads by vehicles. When traffic demand is great enough that the interaction...
on the roads, and the need for parking
Parking
Parking is the act of stopping a vehicle and leaving it unoccupied for more than a brief time. Parking on one or both sides of a road is commonly permitted, though often with restrictions...
spaces. Authorities often encourage carpooling, especially during high pollution periods and high fuel prices.

Drivers and passengers offer and search for journeys through one of the several mediums available. After finding a match they contact each other to arrange any details for the journey(s). Costs, meeting points and other details like space for luggage are discussed and agreed on. They then meet and carry out their shared car journey(s) as planned.

Carpooling is commonly implemented for commuting
Commuting
Commuting is regular travel between one's place of residence and place of work or full time study. It sometimes refers to any regular or often repeated traveling between locations when not work related.- History :...
but is also popular for longer one-off journeys, with the formality and regularity of arrangements varying between schemes and journeys.

Carpooling is not always arranged for the whole length of a journey. Especially on long journeys, it is common for passengers to only join for parts of the journey, and give a contribution based on the distance that they travel. This gives carpooling extra flexibility, and enables more people to share journeys and save money.

The arrangements for carpooling can be made through many different mediums, including:

In an effort to reduce traffic and encourage carpooling some countries have introduced high-occupancy vehicle (HOV) lanes in which only vehicles with two or more passengers are allowed to drive. In some countries it is also common to find parking spaces that are reserved especially for carpoolers. Many companies and local authorities have introduced carpooling schemes, often as part of wider transport programs.

In 2011, an organization called Greenxc
GreenXC
Started in 2011, GreenXC is an organization that works to raise awareness for National Parks, National Forests and the National Park Foundation, the official charity of America’s nearly 400 national parks. It focuses on the youth and reaches out to connect them to the parks and forests in order to...
created a campaign to in order to encourage others to use this form of transportation in order to reduce their own carbon footprint. 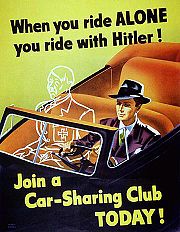 Carpooling first became prominent in the United States as a rationing
Rationing
Rationing is the controlled distribution of scarce resources, goods, or services. Rationing controls the size of the ration, one's allotted portion of the resources being distributed on a particular day or at a particular time.- In economics :...
tactic during World War II
World War II
World War II, or the Second World War , was a global conflict lasting from 1939 to 1945, involving most of the world's nations—including all of the great powers—eventually forming two opposing military alliances: the Allies and the Axis...
. It returned in the mid-1970s due to the 1973 oil crisis
1973 oil crisis
The 1973 oil crisis started in October 1973, when the members of Organization of Arab Petroleum Exporting Countries or the OAPEC proclaimed an oil embargo. This was "in response to the U.S. decision to re-supply the Israeli military" during the Yom Kippur war. It lasted until March 1974. With the...
and the 1979 energy crisis
1979 energy crisis
The 1979 oil crisis in the United States occurred in the wake of the Iranian Revolution. Amid massive protests, the Shah of Iran, Mohammad Reza Pahlavi, fled his country in early 1979 and the Ayatollah Khomeini soon became the new leader of Iran. Protests severely disrupted the Iranian oil...
. At that time the first employee vanpools were organized at Chrysler
Chrysler
Chrysler Group LLC is a multinational automaker headquartered in Auburn Hills, Michigan, USA. Chrysler was first organized as the Chrysler Corporation in 1925....
and 3M
3M
3M Company , formerly known as the Minnesota Mining and Manufacturing Company, is an American multinational conglomerate corporation based in Maplewood, Minnesota, United States....
.

Since the 1970s carpooling has declined significantly. In the US it peaked in 1980 with a commute mode share of 19.7%, and by 2010, it was only 10%. Recently, however, the internet has facilitated growth for carpooling. The popularity of the internet
Internet
The Internet is a global system of interconnected computer networks that use the standard Internet protocol suite to serve billions of users worldwide...
and mobile phones has greatly helped carpooling to expand, by enabling people to offer and find rides more easily, and easily contact each other to arrange them.

Carpooling also exists in other forms: