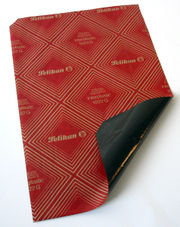 Carbon paper is paper
Paper
Paper is a thin material mainly used for writing upon, printing upon, drawing or for packaging. It is produced by pressing together moist fibers, typically cellulose pulp derived from wood, rags or grasses, and drying them into flexible sheets....
coated on one side with a layer of a loosely bound dry ink
Ink
Ink is a liquid or paste that contains pigments and/or dyes and is used to color a surface to produce an image, text, or design. Ink is used for drawing and/or writing with a pen, brush, or quill...
or pigmented coating
Coated paper
Coated paper is paper which has been coated by a compound to impart certain qualities to the paper, including weight, surface gloss, smoothness or reduced ink absorbency. Kaolinite or calcium carbonate are used to coat paper for high quality printing used in packaging industry and in magazines...
, usually bound with wax
Wax
thumb|right|[[Cetyl palmitate]], a typical wax ester.Wax refers to a class of chemical compounds that are plastic near ambient temperatures. Characteristically, they melt above 45 °C to give a low viscosity liquid. Waxes are insoluble in water but soluble in organic, nonpolar solvents...
. It is used for making one or more copies simultaneous with the creation of an original document. Manufacturing of carbon paper was formerly the largest consumer of montan wax
Montan wax
Montan wax, also known as lignite wax or OP wax, is a hard wax obtained by solvent extraction of certain types of lignite or brown coal. Commercially viable deposits exist in only a few locations, including Amsdorf, Germany, and in the Ione Basin near Ione, California.-Properties:Its color ranges...
.

Carbon paper is placed between the original and a the second sheet to be copied onto. As the user writes or types
Typewriter
A typewriter is a mechanical or electromechanical device with keys that, when pressed, cause characters to be printed on a medium, usually paper. Typically one character is printed per keypress, and the machine prints the characters by making ink impressions of type elements similar to the pieces...
on the original, the pressure from the pen or typeface
Typeface
In typography, a typeface is the artistic representation or interpretation of characters; it is the way the type looks. Each type is designed and there are thousands of different typefaces in existence, with new ones being developed constantly....
deposits the ink on the blank sheet, thus creating a "carbon copy
Carbon copy
Carbon copying, abbreviated cc or c.c., is the technique of using carbon paper to produce one or more copies simultaneously during the creation of paper documents...
" of the original document. This technique is generally limited to four or five copies.

As the ink is transferred from the carbon paper to the underlying paper, an impression of the corresponding text is left on the "carbon" where the ink was removed. A single piece of carbon paper can be repeatedly reused until the impression grows too light.

Carbon paper has been mostly superseded by electronic means such as photocopying, though it is still, although rarely, used to make copies of typewriting. Also, a carbonless copy paper
Carbonless copy paper
Carbonless copy paper , non-carbon copy paper, or NCR paper is an alternative to carbon paper, used to make a copy of an original, handwritten document without the use of any electronics...
is still used in situations where instant copies of written documents are needed. Examples of this are receipts at point of sale
Point of sale
Point of sale or checkout is the location where a transaction occurs...
(though they have mostly been relegated to being backups for when electronic POS devices fail) or for on-the-spot fine notices, duplicate checks
Cheque
A cheque is a document/instrument See the negotiable cow—itself a fictional story—for discussions of cheques written on unusual surfaces. that orders a payment of money from a bank account...
, and some money orders (though the United States Postal Service
United States Postal Service
The United States Postal Service is an independent agency of the United States government responsible for providing postal service in the United States...
has recently converted to an electronic format), and tracking slips for various expedited mail services requiring multiple copies.

There have been some experimental uses of carbon paper in art (as a surface for painting) and mail art
Mail art
Mail art is a worldwide cultural movement that began in the early 1960s and involves sending visual art through the international postal system. Mail Art is also known as Postal Art or Correspondence Art...
(to decorate envelopes).