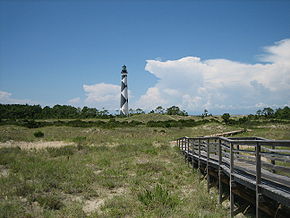 Cape Lookout National Seashore preserves a 56-mile (90-km) long section of the Southern Outer Banks
Outer Banks
The Outer Banks is a 200-mile long string of narrow barrier islands off the coast of North Carolina, beginning in the southeastern corner of Virginia Beach on the east coast of the United States....
, or Crystal Coast
Crystal Coast
The Crystal Coast is an 85-mile stretch of coastline in North Carolina that extends from the Cape Lookout National Seashore, which includes 56 miles of protected beaches, westward to the New River. It is also known as the Southern Outer Banks and is a popular area with tourists and second-home...
, of North Carolina
North Carolina
North Carolina is a state located in the southeastern United States. The state borders South Carolina and Georgia to the south, Tennessee to the west and Virginia to the north. North Carolina contains 100 counties. Its capital is Raleigh, and its largest city is Charlotte...
, USA
United States
The United States of America is a federal constitutional republic comprising fifty states and a federal district...
, running from Ocracoke Inlet on the northeast to Beaufort Inlet on the southeast. Three undeveloped barrier islands make up the seashore - North Core Banks, South Core Banks and Shackleford Banks
Shackleford Banks
Shackleford Banks is a barrier island system on the coast of Carteret County, North Carolina. It contains a herd of feral horses, scallop, crabs and various sea animals, including summer nesting by loggerhead turtles...
. The seashore includes two historic villages on Core Banks, Shackleford's wild horses, and the Cape Lookout Lighthouse
Cape Lookout Lighthouse
The Cape Lookout Lighthouse is a 163-foot high lighthouse located on the Southern Outer Banks of North Carolina. It flashes every 15 seconds and is visible at least 12 miles out to sea and up to 19 miles. The Cape Lookout Light is one of the very few lighthouses that operate during the day. It...
, which has a black-and-white diamond pattern. A visitors center for the seashore is located on Harkers Island
Harkers Island, North Carolina
Harkers Island is a census-designated place in Carteret County, North Carolina, United States. The population of Harkers Island was 1,623 at the 2007 census. Harkers Island is unincorporated and receives most public services, including law enforcement and public education, from Carteret County....
.

The National Park Service, as part of their Centennial Initiative celebrating its 100th anniversary in 2016, is planning to rehabilitate the Lighthouse and restore the Cape Lookout and Portsmouth Village
Portsmouth, North Carolina
Portsmouth was a fishing and shipping village located on the north end of the Core Banks on the Outer Banks in North Carolina. The site lies on Portsmouth Island in Carteret County, across Ocracoke Inlet from the village of Ocracoke. The town was established in 1753, and abandoned in 1971...
Historic Districts.

The National Seashore was authorized on March 10, 1966. It was named a North Carolina Natural Heritage Area on May 23, 1986. The seashore was designated the Carolinian-South Atlantic Biosphere Reserve on June 16, 1986. Near noon on September 9, 2007, Tropical Storm Gabrielle
Tropical Storm Gabrielle (2007)
Tropical Storm Gabrielle was a short-lived tropical cyclone that passed over North Carolina before tracking out to sea. The seventh named storm of the 2007 Atlantic hurricane season, Gabrielle developed as a subtropical cyclone on September 8 about 385 miles southeast of Cape Lookout, North...
made landfall at this exact point with winds of 60 mi/h. Damage was light but flooding and beach erosion affected this lookout.