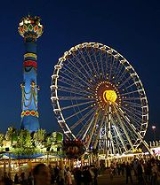 Encyclopedia
The Cannstatter Wasen is a 35 hectare festival area on the banks of the Neckar
Neckar
The Neckar is a long river, mainly flowing through the southwestern state of Baden-Württemberg, but also a short section through Hesse, in Germany. The Neckar is a major right tributary of the River Rhine...
river in the part of Stuttgart
Stuttgart
Stuttgart is the capital of the state of Baden-Württemberg in southern Germany. The sixth-largest city in Germany, Stuttgart has a population of 600,038 while the metropolitan area has a population of 5.3 million ....
known as Bad Cannstatt.

The Cannstatter Wasen form part of the Neckar Park Fairground.