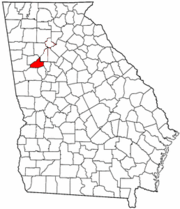 The original county seat was Campbellton
Campbellton, Georgia
Campbellton is an unincorporated town in southwestern Fulton County, Georgia, that lies along the banks of the Chattahoochee River. The area prior to white settlement was populated by the Creek Indians. Campbellton was settled by several families. The Beavers Family owned and farmed a large...
; however, when the Atlanta & West Point Railroad began to plan its route, the town's residents said no due to noise concerns. The tracks
Rail tracks
The track on a railway or railroad, also known as the permanent way, is the structure consisting of the rails, fasteners, sleepers and ballast , plus the underlying subgrade...
were laid through Fairburn
Fairburn, Georgia
Fairburn is a city in Fulton County, Georgia. The population was 12,950 at the 2010 census.- History :Fairburn is located along a railroad line and was once the county seat for Campbell County, Georgia, starting in 1870...
instead, which flourished while Campbellton died out, and Fairburn soon became the new county seat
County seat
A county seat is an administrative center, or seat of government, for a county or civil parish. The term is primarily used in the United States....
in 1870.
The northwestern half of Campbell (and a bit more of Carroll) became Douglas
Douglas County, Georgia
Douglas County, Georgia has been experiencing numerous natural disasters over the most recent decades. Being located in the South Eastern United States the county experiences strong storms and tornadoes often because of its location in Dixie Alley....
County in 1870, divided on October 17 at the Chattahoochee River
Chattahoochee River
The Chattahoochee River flows through or along the borders of the U.S. states of Georgia, Alabama, and Florida. It is a tributary of the Apalachicola River, a relatively short river formed by the confluence of the Chattahoochee and Flint Rivers and emptying into Apalachicola Bay in the Gulf of...
. The remainder of Campbell County was ceded to Fulton County at the end of 1931, along with Milton County
Milton County, Georgia
Milton County was a county of the U.S. state of Georgia from 1857 to 1931. It was created on December 18, 1857 from parts of northeastern Cobb, southeastern Cherokee, and southwestern Forsyth counties. The county was named for John Milton, Secretary of State of Georgia from 1777 to 1799...
, to save money. The legislation
Legislation
Legislation is law which has been promulgated by a legislature or other governing body, or the process of making it...
creating the merger was enacted on August 9, 1929, with Milton being added to the process in 1931.
The source of this article is wikipedia, the free encyclopedia.  The text of this article is licensed under the GFDL.