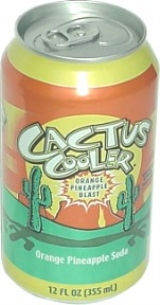 Encyclopedia
Cactus Cooler, distinguished by its orange, yellow, and green label, is an orange
Orange (fruit)
An orange—specifically, the sweet orange—is the citrus Citrus × sinensis and its fruit. It is the most commonly grown tree fruit in the world....
-pineapple
Pineapple
Pineapple is the common name for a tropical plant and its edible fruit, which is actually a multiple fruit consisting of coalesced berries. It was given the name pineapple due to its resemblance to a pine cone. The pineapple is by far the most economically important plant in the Bromeliaceae...
soft drink
Soft drink
A soft drink is a non-alcoholic beverage that typically contains water , a sweetener, and a flavoring agent...
sold in the United States
United States
The United States of America is a federal constitutional republic comprising fifty states and a federal district...
, mainly in the Southern California
Southern California
Southern California is a megaregion, or megapolitan area, in the southern area of the U.S. state of California. Large urban areas include Greater Los Angeles and Greater San Diego. The urban area stretches along the coast from Ventura through the Southland and Inland Empire to San Diego...
area and surrounding Southwestern United States
Southwestern United States
The Southwestern United States is a region defined in different ways by different sources. Broad definitions include nearly a quarter of the United States, including Arizona, California, Colorado, Nevada, New Mexico, Oklahoma, Texas and Utah...
. It is part of the Dr Pepper Snapple Group
Dr Pepper Snapple Group
Dr Pepper Snapple Group Inc. is an American soft drink company, based in Plano, Texas.It was spun off from Britain's Cadbury Schweppes, on May 5, 2008, with trading in its shares starting on May 7, 2008...
, and was previously distributed under the Canada Dry
Canada Dry
Canada Dry is a brand of soft drinks owned since 2008 by the Texas-based Dr Pepper Snapple Group. For over a century Canada Dry has been known for its ginger ale, though the company also manufactures a number of other soft drinks and mixers...
brand name.
Cactus Cooler was inspired by the 1960s cartoon show The Flintstones
The Flintstones
The Flintstones is an animated, prime-time American television sitcom that screened from September 30, 1960 to April 1, 1966, on ABC. Produced by Hanna-Barbera Productions, The Flintstones was about a working class Stone Age man's life with his family and his next-door neighbor and best friend. It...
.
A fictional Cactus Cooler was the favorite drink of character Fred Flintstone. The name of the drink was inspired from this.

Cactus Cooler is also seen on the popular television show Weeds
Weeds (TV series)
Weeds is an American television comedy created by Jenji Kohan and produced by Tilted Productions in association with Lionsgate Television. The central character is Nancy Botwin , a widowed mother of two boys who begins selling marijuana to support her family after her husband dies suddenly of a...
, where many characters favor this drink.
The source of this article is wikipedia, the free encyclopedia.  The text of this article is licensed under the GFDL.