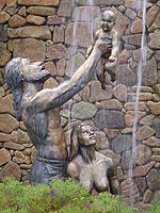 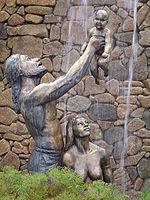 The term caboclo (which in Candomblé
Candomblé
Candomblé is an African-originated or Afro-Brazilian religion, practised chiefly in Brazil by the "povo de santo" . It originated in the cities of Salvador, the capital of Bahia and Cachoeira, at the time one of the main commercial crossroads for the distribution of products and slave trade to...
is usually pronounced without the l, as caboco) is said to come from the Tupi word kari'boka, meaning 'deriving from the white'. Thus its primary meaning is mestizo, 'a person of an Indian and European descent.' But it may also be used to refer to any Brazilian Indian." The term Indian should not be confused with people originating from South Asia.

There was a wave of caboclos created during the time of rubber soldiers, when young, primarily white Brazilian men were taken from North-Eastern Brazil
Northeast Region, Brazil
The Northeast Region of Brazil is composed of the following states: Maranhão, Piauí, Ceará, Rio Grande do Norte, Paraíba, Pernambuco, Alagoas, Sergipe and Bahia, and it represents 18.26% of the Brazilian territory....
and brought into the Amazonian interior to harvest rubber
Rubber
Natural rubber, also called India rubber or caoutchouc, is an elastomer that was originally derived from latex, a milky colloid produced by some plants. The plants would be ‘tapped’, that is, an incision made into the bark of the tree and the sticky, milk colored latex sap collected and refined...
. The men were never granted permission to leave, and thus married locally.

Interestingly, the traditional caboclo populations in the Amazon
Amazon Basin
The Amazon Basin is the part of South America drained by the Amazon River and its tributaries that drains an area of about , or roughly 40 percent of South America. The basin is located in the countries of Bolivia, Brazil, Colombia, Ecuador, Guyana, Peru, and Venezuela...
region of Brazil are noted as voracious eaters of the açaí palm fruit. In a study, açaí palm was described as the most important plant species because the fruit makes up such a major component of diet (up to 42% of the total food intake by weight) and is economically valuable in the region (Murrieta et al., 1999).

The "Day of the Caboclo" (Dia do Caboclo), on June 24, is an official date of the State of Amazonas.

The term caboco is also used as an alternate term for the Orishas of the Candomblé
Candomblé
Candomblé is an African-originated or Afro-Brazilian religion, practised chiefly in Brazil by the "povo de santo" . It originated in the cities of Salvador, the capital of Bahia and Cachoeira, at the time one of the main commercial crossroads for the distribution of products and slave trade to...
religion. The caboclo is also an Orisha.

For multiculturalistic anthropology, the term "caboclo" has been criticized as too vague and prejudgmental for scientific use.