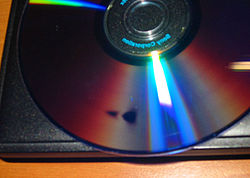 Disc rot is a phrase describing the tendency of CD or DVD
DVD
A DVD is an optical disc storage media format, invented and developed by Philips, Sony, Toshiba, and Panasonic in 1995. DVDs offer higher storage capacity than Compact Discs while having the same dimensions....
or other optical disks to become unreadable due to physical or chemical deterioration. The causes of this effect vary from oxidation of the reflective layer, to physical scuffing and abrasion of disk surfaces or edges, including visible scratches, to other kinds of reactions with contaminants, to ultra-violet light damage and de-bonding of the adhesive used to adhere the layers of the disc together.

In CDs, the reflective layer is immediately beneath a thin protective layer of lacquer
Lacquer
In a general sense, lacquer is a somewhat imprecise term for a clear or coloured varnish that dries by solvent evaporation and often a curing process as well that produces a hard, durable finish, in any sheen level from ultra matte to high gloss and that can be further polished as required...
, and is also exposed at the edge of the disk. The lacquer protecting the edge of an optical disk can usually be seen without magnification. It is rarely uniformly thick; thickness variations are usually visible. The reflective layer is typically aluminum, which reacts easily with several commonly encountered chemicals such as oxygen
Oxygen
Oxygen is the element with atomic number 8 and represented by the symbol O. Its name derives from the Greek roots ὀξύς and -γενής , because at the time of naming, it was mistakenly thought that all acids required oxygen in their composition...
, sulphur, and certain ions carried by condensed water. In ordinary use a surface layer of aluminum oxide is formed very quickly when an aluminum surface is exposed to the atmosphere; it serves as passivation
Passivation
Passivation is the process of making a material "passive", and thus less reactive with surrounding air, water, or other gases or liquids. The goal is to inhibit corrosion, whether for structural or cosmetic reasons. Passivation of metals is usually achieved by the deposition of a layer of oxide...
for the bulk aluminum with regard to many but not all contaminants. CD reflective layers are so thin that this passivation is less effective. In the case of CD-R
CD-R
A CD-R is a variation of the Compact Disc invented by Philips and Sony. CD-R is a Write Once Read Many optical medium, though the whole disk does not have to be entirely written in the same session....
and CD-RW
CD-RW
A CD-RW is a rewritable optical disc. It was introduced in 1997, and was known as "CD-Writable" during development. It was preceded by the CD-MO, which was never commercially released....
media, the materials used in the reflecting layer are more complex than a simple aluminum layer, but also can present problems if contaminated. The thin 10-20 thousandths of an inch layer of protective lacquer is equivalent.

DVDs have a different structure from CDs, using a plastic disc over the reflecting layer. This means that a scratch on either surface of a DVD is not as likely to reach the reflective layer and expose it to environmental contamination and perhaps to cause corrosion, perhaps progressive corrosion. Each type of optical disk thus has different susceptibility to contamination and corrosion of its reflecting layer; furthermore, the writeable and re-writable versions of each optical disk type are somewhat different as well. Finally, disks made with gold
Gold
Gold is a chemical element with the symbol Au and an atomic number of 79. Gold is a dense, soft, shiny, malleable and ductile metal. Pure gold has a bright yellow color and luster traditionally considered attractive, which it maintains without oxidizing in air or water. Chemically, gold is a...
as the reflecting layer are considerably less vulnerable to corrosion problems, though no less susceptible to physical damage to that layer. Because they are less expensive, the industry has adopted aluminum reflecting layers as the standard for factory pressed optical disks.

On CDs, the rot becomes visually noticeable in two ways:


In audio CDs, the rot leads to scrambled or skipped audio or even the inability to play a track.

A Philips
Philips
Koninklijke Philips Electronics N.V. , more commonly known as Philips, is a multinational Dutch electronics company....
press officer has declared CD rot to be an isolated problem affecting only an "absolute minority" of cases. PDO has offered to replace any discs affected by CD bronzing
CD bronzing
CD bronzing is a specific variant of disc rot, a type of corrosion that affects the reflective layer of CDs and renders them unreadable over time...
if supplied with the defective disk and proof of purchase. However, according to the website of one of the affected record companies, Hyperion, PDO's helpline was discontinued in 2006 after a change of ownership, and defective CDs are now no longer replaced by the manufacturer, even though some of the affected record labels continue to offer replacements.

Laser rot was a disc rot phenomenon observed by some users of the Laserdisc
Laserdisc
LaserDisc was a home video format and the first commercial optical disc storage medium. Initially licensed, sold, and marketed as MCA DiscoVision in North America in 1978, the technology was previously referred to interally as Optical Videodisc System, Reflective Optical Videodisc, Laser Optical...
format in which audio or video quality began to degrade over time. It was generally attributed to oxidation in the aluminum layers by poor quality adhesives used to bond the disc halves together. Single-sided video disks did not appear to suffer from laser rot while double-sided disks did. The name "laser rot" is a misnomer—the disc degradation does not involve the player's laser.

Laser rot was indicated by the appearance of multi-colored speckles appearing in the video output of a laserdisc during playback. The speckles increased in volume and frequency as the disc continued to degrade. Much of the early production run of MCA DiscoVision
DiscoVision
DiscoVision is the name of several things related to the video laserdisc format. It was the original name of the "Reflective Optical Videodisc System" format later known as LaserVision or LaserDisc....
Discs had severe laser rot. Many DiscoVision titles have ceased to function since their pressings in the late 1970s.