Encyclopedia
C5a is a protein fragment released from complement component C5
Complement component 5
Complement component 5 is a protein that in humans is encoded by the C5 gene.Complement component 5 is involved in the complement system. It is cleaved into C5a and C5b:* C5a plays an important role in chemotaxis....
. In humans, the polypeptide contains 74 amino acids. NMR spectroscopy proved that the molecule is composed of four helices and loops connecting the helices. On the N terminus a short 1.5 turn helix is also present. The longest helix -IV- develops three disulfide bonds with helix II and III. C5a is rapidly metabolised by a serum enzyme
Enzyme
Enzymes are proteins that catalyze chemical reactions. In enzymatic reactions, the molecules at the beginning of the process, called substrates, are converted into different molecules, called products. Almost all chemical reactions in a biological cell need enzymes in order to occur at rates...
, carboxypeptidase B
Carboxypeptidase B
Carboxypeptidase B is a carboxypeptidase that preferentially acts upon basic amino acids, such as arginine and lysine.-External links:* The MEROPS online database for peptidases and their inhibitors:...
to a 73 amino acid form, C5a des-Arg. 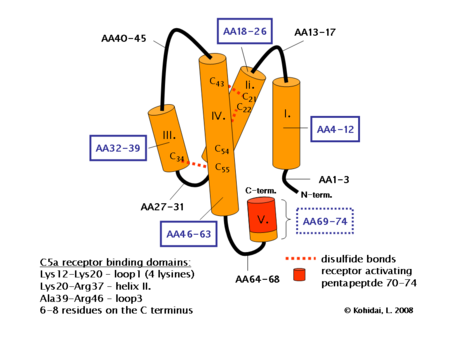 C5a binds to a receptor
Receptor (biochemistry)
In biochemistry, a receptor is a molecule found on the surface of a cell, which receives specific chemical signals from neighbouring cells or the wider environment within an organism...
protein on the surface of target cells, C5aR or CD88. This is a member of the G-protein-coupled receptor superfamily of proteins, predicted to have seven transmembrane helical domains of largely hydrophobic amino acid
Amino acid
Amino acids are molecules containing an amine group, a carboxylic acid group and a side-chain that varies between different amino acids. The key elements of an amino acid are carbon, hydrogen, oxygen, and nitrogen...
residues, forming three intra- and three extra-cellular loops, with an extracellular N-terminus and an intracellular C-terminus. C5a binding to the receptor is a two-stage process: an interaction between basic residues in the helical core of C5a and acidic residues in the extracellular N-terminal domain allows the C-terminus of C5a to bind to residues in the receptor transmembrane domains. The latter interaction leads to receptor activation, and the transduction of the ligand binding signal across the cell plasma membrane to the cytoplasmic G protein Gi
Gi alpha subunit
Gi alpha subunit is a heterotrimeric G protein subunit that inhibits the production of cAMP from ATP.- Receptors :The following G protein-coupled receptors couple to the Gi subunit:* Acetylcholine M2 & M4 receptors...
type GNAI2
GNAI2
Guanine nucleotide-binding protein G, alpha-2 subunit is a protein that in humans is encoded by the GNAI2 gene.-Interactions:GNAI2 has been shown to interact with GPSM2, RIC8A, Interleukin 8 receptor, alpha, EYA2, RGS5 and MDFI.-Further reading:...
.
The source of this article is wikipedia, the free encyclopedia.  The text of this article is licensed under the GFDL.