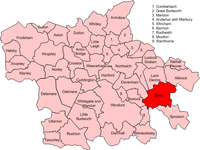 Byley is a village and civil parish in the unitary authority of Cheshire West and Chester
Cheshire West and Chester
Cheshire West and Chester is a unitary authority area with borough status, in the ceremonial county of Cheshire. It was established in April 2009 as part of the 2009 structural changes to local government in England, by virtue of an order under the Local Government and Public Involvement in Health...
and the ceremonial county of Cheshire
Cheshire
Cheshire is a ceremonial county in North West England. Cheshire's county town is the city of Chester, although its largest town is Warrington. Other major towns include Widnes, Congleton, Crewe, Ellesmere Port, Runcorn, Macclesfield, Winsford, Northwich, and Wilmslow...
, England
England
England is a country that is part of the United Kingdom. It shares land borders with Scotland to the north and Wales to the west; the Irish Sea is to the north west, the Celtic Sea to the south west, with the North Sea to the east and the English Channel to the south separating it from continental...
, about 2½ miles north of Middlewich
Middlewich
Middlewich is a market town in the unitary authority of Cheshire East and the ceremonial county of Cheshire, England. It is east of the city of Chester, east of Winsford, southeast of Northwich and northwest of Sandbach....
.

According to the 2001 census
Census
A census is the procedure of systematically acquiring and recording information about the members of a given population. It is a regularly occurring and official count of a particular population. The term is used mostly in connection with national population and housing censuses; other common...
it had a population of 202.

This small village is said to be the 'Heart Of Cheshire'