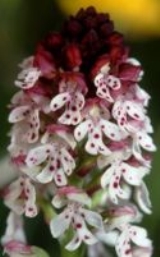 Encyclopedia
The Burnt Orchid is a European terrestrial orchid, most common in the mountains. It flowers between April and August depending on the altitude.

Neotinea ustulata is now the accepted name. It was previously described as Orchis ustulata (L.
Carolus Linnaeus
Carl Linnaeus , also known after his ennoblement as , was a Swedish botanist, physician, and zoologist, who laid the foundations for the modern scheme of binomial nomenclature. He is known as the father of modern taxonomy, and is also considered one of the fathers of modern ecology...
1753).http://www.kew.org/wcsp/namedetail.do?accepted_id=134151&repSynonym_id=-9998&name_id=143371&status=false

The Burnt Orchid was voted the County flower
County flowers of the United Kingdom
The following are the flowers selected for the historic counties of the United Kingdom in Plantlife's 2002 "County Flowers" campaign...
of Wiltshire
Wiltshire
Wiltshire is a ceremonial county in South West England. It is landlocked and borders the counties of Dorset, Somerset, Hampshire, Gloucestershire, Oxfordshire and Berkshire. It contains the unitary authority of Swindon and covers...
in 2002 following a poll by the wild flora conservation charity Plantlife
Plantlife
Plantlife is a wild plant conservation charity. As of 2007, its membership was 10,500 and it owned 23 nature reserves around the UK.-History:It was founded in 1989 with its first President being Professor David Bellamy. By 1999 it had 22 nature reserves....
.

Burnt Orchid's largest population in northwest Europe is on Parsonage Down
Parsonage Down
Parsonage Down is a 188.6 hectare biological Site of Special Scientific Interest in Wiltshire, notified in 1971.The site is a National Nature Reserve....
, in Wiltshire
Wiltshire
Wiltshire is a ceremonial county in South West England. It is landlocked and borders the counties of Dorset, Somerset, Hampshire, Gloucestershire, Oxfordshire and Berkshire. It contains the unitary authority of Swindon and covers...
, England
England
England is a country that is part of the United Kingdom. It shares land borders with Scotland to the north and Wales to the west; the Irish Sea is to the north west, the Celtic Sea to the south west, with the North Sea to the east and the English Channel to the south separating it from continental...
.
The source of this article is wikipedia, the free encyclopedia.  The text of this article is licensed under the GFDL.