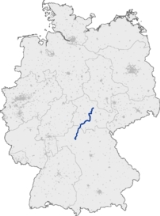 Encyclopedia
is an Autobahn under construction in Germany
Germany
Germany , officially the Federal Republic of Germany , is a federal parliamentary republic in Europe. The country consists of 16 states while the capital and largest city is Berlin. Germany covers an area of 357,021 km2 and has a largely temperate seasonal climate...
. When completed, it will connect the A 38 and Erfurt
Erfurt
Erfurt is the capital city of Thuringia and the main city nearest to the geographical centre of Germany, located 100 km SW of Leipzig, 150 km N of Nuremberg and 180 km SE of Hannover. Erfurt Airport can be reached by plane via Munich. It lies in the southern part of the Thuringian...
to the A 70 near Schweinfurt
Schweinfurt
Schweinfurt is a city in the Lower Franconia region of Bavaria in Germany on the right bank of the canalized Main, which is here spanned by several bridges, 27 km northeast of Würzburg.- History :...
.

Construction on the A 71, supervised by DEGES
DEGES
The Deutsche Einheit Fernstraßenplanungs- und -bau GmbH is a state-owned project management institution founded on October 7th, 1991, about one year after the German reunification...
, began in 1996, most parts were being opened by December 2005. Completion is projected for 2008. The section through the Thuringian Forest
Thuringian Forest
The Thuringian Forest running northwest to southeast, forms a continuous stretch of ancient rounded mountains posing ample difficulties in transit routing save through a few navigable passes in the southern reaches of the German state of Thuringia. It is about long and wide...
is the most expensive road ever built in Germany with an average cost of 16 million euro for each mile (roughly 10 million euro for every kilometre). This section includes the Rennsteig Tunnel
Rennsteig Tunnel
Rennsteig Tunnel is the longest road tunnel in Germany with a length of 7,916 meters .The Rennsteig Tunnel is part of the motorway Autobahn A 71 between Gräfenroda and Oberhof in Thuringia...
which is the longest road tunnel in Germany at 5 miles (7.9 km).