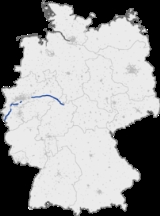 Encyclopedia
is a German Autobahn. It consists of three main-parts and a few smaller parts. It begins in Aachen
Aachen
Aachen has historically been a spa town in North Rhine-Westphalia, Germany. Aachen was a favoured residence of Charlemagne, and the place of coronation of the Kings of Germany. Geographically, Aachen is the westernmost town of Germany, located along its borders with Belgium and the Netherlands, ...
at the German-Belgian border and ends near Kassel
Kassel
Kassel is a town located on the Fulda River in northern Hesse, Germany. It is the administrative seat of the Kassel Regierungsbezirk and the Kreis of the same name and has approximately 195,000 inhabitants.- History :...
. Before the German unification it was an unimportant provincial-motorway but after this event it became an integral part of the German highway-system. The A 44 is a high-frequented link between the Rhine-Ruhr-Area and the new German states, especially Thuringia.

The first section of this motorway which was opened was the connection between Aachen and the interchange Aachen. This was in 1963.

The section Geseke-Büren was constructed as an auxiliary runway. This section is even and straight, without any constructions like bridges and the crash-barriers can be taken out. It was constructed to be a runway for US-military aircraft in a war with NATO's opponent, the Warsaw Pact
Warsaw Pact
The Warsaw Treaty Organization of Friendship, Cooperation, and Mutual Assistance , or more commonly referred to as the Warsaw Pact, was a mutual defense treaty subscribed to by eight communist states in Eastern Europe...
. At both ends of the section there are parking lots for parking and maintenance of the aircraft.

After the opening of the Flughafenbrücke near Düsseldorf-Airport the connections from and to the A 52
Bundesautobahn 52
is an autobahn in western Germany. It starts at the Dutch-German border near the community of Niederkrüchten, district of Viersen. From Elmpt it runs northeast....
were extended. Since the opening two ramps have been closed. If you enter the network at Moenchengladbach-Ost you cannot change directly to the Roermond-bound direction of A 52 and if you approach from Krefeld, you cannot change directly to the Düsseldorf-bound direction. To reactivate these connections two new bridges are necessary. Construction has been in progress since January 2006.
When construction is complete the interchange will have the following connections:

Near Kassel the Autobahn will be lengthened to Thuringia

Demolition of a section

The interchange Jackerath-interchange Holz section and the junction Otzenrath were permanently closed to traffic on October 14th 2005. The reason for the closure was the opencast mine at Garzweiler II. Before this section was closed the Bundesautobahn 61
Bundesautobahn 61
is an autobahn in Germany that connects the border to the Netherlands near Venlo in the northwest to the interchange with A 6 near Hockenheim. In 1965, this required a re-design of the Hockenheimring....
was widened from two to three lanes in each direction. For the closed junction the junction Moenchengladbach-Wanlo was constructed.

When the open cast mine is exhausted - expected in 2017 - a new section of the A 44 will be built across the A 61. This new route will be to the south of the old route. The same to the new junction Jackerath.

This section was taken out of the official network-register in November 2005 and is no longer officially a Bundesautobahn.

|| Belgium
Belgium
Belgium , officially the Kingdom of Belgium, is a federal state in Western Europe. It is a founding member of the European Union and hosts the EU's headquarters, and those of several other major international organisations such as NATO.Belgium is also a member of, or affiliated to, many...