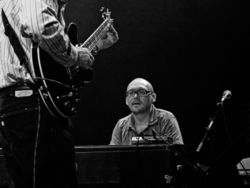 Jens Christian Bugge Wesseltoft (born 1 February 1964 in Porsgrunn
Porsgrunn
is a town and municipality in Telemark county, Norway. It is part of the traditional region of Grenland. The administrative centre of the municipality is the town of Porsgrunn....
) is a Norwegian
Norway
Norway , officially the Kingdom of Norway, is a Nordic unitary constitutional monarchy whose territory comprises the western portion of the Scandinavian Peninsula, Jan Mayen, and the Arctic archipelago of Svalbard and Bouvet Island. Norway has a total area of and a population of about 4.9 million...
jazz
Jazz
Jazz is a musical style that originated at the beginning of the 20th century in African American communities in the Southern United States. It was born out of a mix of African and European music traditions. From its early development until the present, jazz has incorporated music from 19th and 20th...
musician, pianist, composer and producer. He has his own label named Jazzland Records. In the 1990s, Bugge has made a transition from Nordic jazz traditions exemplified by the ECM
ECM (record label)
ECM is a record label founded in Munich, Germany, in 1969 by Manfred Eicher. While ECM is best known for jazz music, the label has released a wide variety of recordings, and ECM's artists often refuse to acknowledge boundaries between genres...
record label
Record label
In the music industry, a record label is a brand and a trademark associated with the marketing of music recordings and music videos. Most commonly, a record label is the company that manages such brands and trademarks, coordinates the production, manufacture, distribution, marketing and promotion,...
to a style sometimes referred to as "future jazz" or nu jazz
Nu jazz
Nu jazz is an umbrella term coined in the late 1990s to refer to music that blends jazz elements with other musical styles, such as funk, soul, electronic dance music, and free improvisation...
. He has played with Jan Garbarek
Jan Garbarek
Jan Garbarek is a Norwegian tenor and soprano saxophonist, active in the jazz, classical, and world music genres. Garbarek was born in Mysen, Norway, the only child of a former Polish prisoner of war Czesław Garbarek and a Norwegian farmer's daughter...
.
He also received in 1996 the "Spellemannprisen" for his album New Conception of Jazz, also in 1998 and 2002 for his albums with Sidsel Endresen, Duplex Ride and Out Here, In There.
The track "Existence" could be heard in Philippe Harel's movie "Extension du domaine de la lutte", adaptation of Michel Houellebecq's roman, written in 1994.