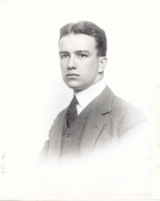 Overview
Richard Buckminster “Bucky” Fuller (July 12, 1895 – July 1, 1983) was an American systems theorist, author
Author
An author is broadly defined as "the person who originates or gives existence to anything" and that authorship determines responsibility for what is created. Narrowly defined, an author is the originator of any written work.-Legal significance:...
, designer, inventor, futurist and second president of Mensa International
Mensa International
Mensa is the largest and oldest high-IQ society in the world. It is a non-profit organization open to people who score at the 98th percentile or higher on a standardised, supervised IQ or other approved intelligence test...
, the high IQ society.

Fuller published more than 30 books, inventing and popularizing terms such as "Spaceship Earth
Spaceship Earth
Spaceship Earth is a world view term usually expressing concern over the use of limited resources available on Earth and the behavior of everyone on it to act as a harmonious crew working toward the greater good....
", ephemeralization
Ephemeralization
Ephemeralization, a term coined by R. Buckminster Fuller, is the ability of technological advancement to do "more and more with less and less until eventually you can do everything with nothing". Fuller's vision was that ephemeralization will result in ever-increasing standards of living for an...
, and synergetic
Synergetics (Fuller)
Synergetics is the empirical study of systems in transformation, with an emphasis on total system behavior unpredicted by the behavior of any isolated components, including humanity’s role as both participant and observer....
. He also developed numerous inventions, mainly architectural designs, the best known of which is the geodesic dome
Geodesic dome
A geodesic dome is a spherical or partial-spherical shell structure or lattice shell based on a network of great circles on the surface of a sphere. The geodesics intersect to form triangular elements that have local triangular rigidity and also distribute the stress across the structure. When...
.

Don't fight forces, use them.

Shelter (1932) Sometimes quoted as "Don't oppose forces, use them."

God is a verb.

Thinking is a momentary dismissal of irrelevancies.

Utopia or Oblivion: The Prospects of Humanity (1969)

I live on Earth at present, and I don't know what I am. I know that I am not a category. I am not a thing — a noun. I seem to be a verb, an evolutionary process — an integral function of the universe.

I seek through comprehensive anticipatory design science and its reductions to physical practices to reform the environment instead of trying to reform humans, being intent thereby to accomplish prototyped capabilities of doing more with less... (en:1947|1947)

Nature is trying very hard to make us succeed, but nature does not depend on us. We are not the only experiment.