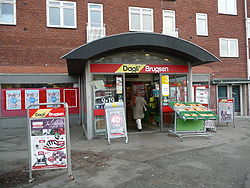 Brugsen operates over 300 stores across Denmark. Making it one of Denmark Largest supermarket chains.