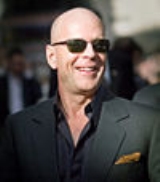 Overview
Walter Bruce Willis better known as Bruce Willis, is an American actor, producer, and musician. His career began in television in the 1980s and has continued both in television and film since, including comedic, dramatic, and action roles. He is well known for the role of John McClane
John McClane
John McClane is a fictional character and the protagonist of the Die Hard film series, portrayed by Bruce Willis.-Development and description:...
in the Die Hard series, which were mostly critical and uniformly financial successes. He has also appeared in over sixty films, including box office successes like Pulp Fiction
Pulp fiction
Pulp fiction may refer to:* pulp magazines, short stories presented in a magazine format, printed on cheaply made wood-pulp paper* Pulp Fiction, a 1994 film directed by Quentin Tarantino...
, Sin City
Sin City (film)
Sin City, also known as Frank Miller's Sin City, is a 2005 crime thriller film written, produced and directed by Frank Miller and Robert Rodriguez...
, 12 Monkeys, The Fifth Element
The Fifth Element
The Fifth Element is a 1997 French science fiction film directed, co-written, and based on a story by Luc Besson, starring Bruce Willis, Gary Oldman, and Milla Jovovich...
, Armageddon, and The Sixth Sense
The Sixth Sense
The Sixth Sense is a 1999 American psychological thriller film written and directed by M. Night Shyamalan. The film tells the story of Cole Sear , a troubled, isolated boy who is able to see and talk to the dead, and an equally troubled child psychologist who tries to help him...
.

Motion pictures featuring Willis have grossed
Gross (economics)
In economics, gross means before deductions. The antonym is net, meaning after deductions.-Usage:In this sense, it may appear an adjective, following the noun it modifies, e.g., "earned two million dollars, gross"...
US$2.64 billion to 3.05 billion at North American box office
Box office
A box office is a place where tickets are sold to the public for admission to an event. Patrons may perform the transaction at a countertop, through an unblocked hole through a wall or window, or at a wicket....
s, making him the ninth highest-grossing actor in a leading role and twelfth highest including supporting roles.

I'm staggered by the question of what it's like to be a multimillionaire. I always have to remind myself that I am.