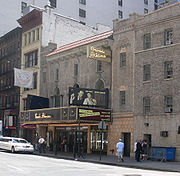 The Brooks Atkinson Theatre is a Broadway
Broadway theatre
Broadway theatre, commonly called simply Broadway, refers to theatrical performances presented in one of the 40 professional theatres with 500 or more seats located in the Theatre District centered along Broadway, and in Lincoln Center, in Manhattan in New York City...
theater located at 256 West 47th Street in Manhattan
New York City
New York is the most populous city in the United States and the center of the New York Metropolitan Area, one of the most populous metropolitan areas in the world. New York exerts a significant impact upon global commerce, finance, media, art, fashion, research, technology, education, and...
.

Designed by architect
Architect
An architect is a person trained in the planning, design and oversight of the construction of buildings. To practice architecture means to offer or render services in connection with the design and construction of a building, or group of buildings and the space within the site surrounding the...
Herbert J. Krapp
Herbert J. Krapp
Herbert J. Krapp was a theatre architect and designer in the early part of the twentieth century.Krapp was an apprentice with the Herts & Tallant firm, where he was involved with designing the plans for the Lyceum, Shubert, Booth, New Amsterdam and Longacre Theatres, among others. He departed the...
, it was constructed as the Mansfield Theatre by the Chanin brothers in 1926. After 1933, the theatre fell into relative disuse until 1945, when Michael Myerberg bought it and leased it to CBS
CBS
CBS Broadcasting Inc. is a major US commercial broadcasting television network, which started as a radio network. The name is derived from the initials of the network's former name, Columbia Broadcasting System. The network is sometimes referred to as the "Eye Network" in reference to the shape of...
for television productions. Known as CBS Studio 59, the theater played host to the long-running game show What's My Line?
What's My Line?
What's My Line? is a panel game show which originally ran in the United States on the CBS Television Network from 1950 to 1967, with several international versions and subsequent U.S. revivals. The game tasked celebrity panelists with questioning contestants in order to determine their occupations....
. In 1960, it was renamed after the former New York Times theater critic, Brooks Atkinson
Brooks Atkinson
Justin Brooks Atkinson was an American theatre critic. He worked for The New York Times from 1925 to 1960...
, and returned to legitimate use.

RAIN - A Tribute to The Beatles is currently playing at the Brooks Atkinson Theatre, replacing Rock of Ages
Rock of Ages (musical)
Rock of Ages is a rock/jukebox musical, with a book by Chris D'Arienzo, built around classic rock hits from the 1980s, especially from the famous glam metal bands of the decade. The musical features songs from Styx, Journey, Bon Jovi, Pat Benatar, Twisted Sister, Steve Perry, Poison and Asia, among...
, which moved to the Helen Hayes Theatre
Helen Hayes Theatre
Helen Hayes Theatre with 597 seats is the smallest Broadway theatre and is located at 240 West 44th Street in midtown-Manhattan....
.

>-
| Uncle Vanya
Uncle Vanya
Uncle Vanya is a play by the Russian playwright Anton Chekhov. It was first published in 1897 and received its Moscow première in 1899 in a production by the Moscow Art Theatre, under the direction of Konstantin Stanislavski....
>-
| Jane Eyre
Jane Eyre (musical)
Jane Eyre is a musical drama with music and lyrics by composer-lyricist Paul Gordon and a book by John Caird, based on the novel by Charlotte Brontë. The musical premiered on Broadway in 2000.-Production history:...
>-
| Medea
Medea (play)
Medea is an ancient Greek tragedy written by Euripides, based upon the myth of Jason and Medea and first produced in 431 BC. The plot centers on the barbarian protagonist as she finds her position in the Greek world threatened, and the revenge she takes against her husband Jason who has betrayed...
>-
| The Look of Love >-
| Jackie Mason's Laughing Room Only >-
| Jumpers
Jumpers
Jumpers is a 1972 play by Tom Stoppard. It explores and satirises the field of academic philosophy, likening it to a less-than skilful competitive gymnastics display...
>-
| Mark Twain Tonight
Mark Twain Tonight
Mark Twain Tonight! Is a one-man play devised by Hal Holbrook, in which he depicts Mark Twain giving a dramatic recitation selected from several of his writings, with an emphasis on the comic ones...
>-
| The Blonde in the Thunderbird >-
| The Odd Couple
The Odd Couple
The Odd Couple is a 1965 Broadway play by Neil Simon, followed by a successful film and television series, as well as other derivative works and spin offs, many featuring one or more of the same actors. The plot concerns two mismatched roommates, one neat and uptight, the other more easygoing and...
>-
| A Moon for the Misbegotten
A Moon for the Misbegotten
A Moon for the Misbegotten is a play by Eugene O'Neill. The play can be thought of as a sequel to the autobiographical Long Day's Journey into Night...