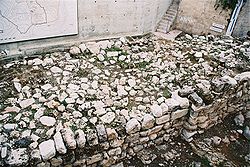 The Broad Wall is an ancient defensive city wall in Jerusalem dating from the reign of King Hezekiah
Hezekiah
Hezekiah was the son of Ahaz and the 14th king of Judah. Edwin Thiele has concluded that his reign was between c. 715 and 686 BC. He is also one of the most prominent kings of Judah mentioned in the Hebrew Bible....
(late eighth century BCE.)

The wall was discovered by archaeologist Nahman Avigad
Nahman Avigad
Dr. Nahman Avigad , born in Zawalow, Galicia , was an Israeli archaeologist.-Biography:...
in the 1970s. This is a massive defensive structure, seven meters thick. The unbroken length of wall uncovered by Avigad's dig runs 65 metre long and is preserved in places to a height of 3.3 metres (3.6 yd).

The wall and its discovery were part of a revision of the history of the city. It had long been believed that the city in this period was confined to the fortified, narrow hill running to the south of the Temple Mount
Temple Mount
The Temple Mount, known in Hebrew as , and in Arabic as the Haram Ash-Sharif , is one of the most important religious sites in the Old City of Jerusalem. It has been used as a religious site for thousands of years...
known as the City of David. Avigad's dig demonstrated that by the late eighth century the city had expanded to include the hill to the west of the Temple Mount, the site of the modern "Old City" of Jerusalem inside the walls built by Suleiman the Magnificent
Suleiman the Magnificent
Suleiman I was the tenth and longest-reigning Sultan of the Ottoman Empire, from 1520 to his death in 1566. He is known in the West as Suleiman the Magnificent and in the East, as "The Lawgiver" , for his complete reconstruction of the Ottoman legal system...
.