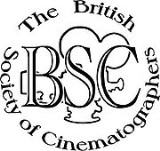 The British Society of Cinematographers (abbreviated BSC) was formed in 1949 by Bert Easey, 23 August 1901 - 28 February 1973, the then head of the Denham and Pinewood studio camera departments.

The stated objectives at the formation of the BSC were

There were originally 55 members. Currently there are 230 full, honorary, associate and patron members. For a British cinematographer, membership of the BSC is an affirmation of the high standard of their craft. The members of the British Society of Cinematographers are entitled to put the initials BSC after their names in motion picture credits.

In the 1981 film The Great Muppet Caper
The Great Muppet Caper
The Great Muppet Caper is a 1981 mystery comedy film directed by Jim Henson. It is the second of a series of live-action musical feature films, starring Jim Henson's Muppets. This film was produced by Henson Associates, ITC Entertainment and Universal Pictures, and premiered on 26 July 1981. The...
, Kermit
Kermit the Frog
Kermit the Frog is puppeteer Jim Henson's most famous Muppet creation, first introduced in 1955. He is the protagonist of many Muppet projects, most notably as the host of The Muppet Show, and has appeared in various sketches on Sesame Street, in commercials and in public service announcements over...
and Fozzie
Fozzie Bear
Fozzie Bear is a Muppet, created by Jim Henson. He is an orange, particularly fuzzy bear who works as a stand-up comic and has a catchphrase, "Wocka Wocka Wocka". Shortly after telling the joke, he is usually the target of rotten tomatoes and ridicule, especially from hecklers Statler and Waldorf...
comment on the opening credits as they appear. When the name of the film's cinematographer
Oswald Morris
Oswald Norman Morris OBE, DFC, AFC, BSC is a British cinematographer. Known to his colleagues by the nicknames "Os" or "Ossie", Morris' film cinematography career spanned six decades.-Early life and career:...
with its post-nominal letters
Post-nominal letters
Post-nominal letters, also called post-nominal initials, post-nominal titles or designatory letters, are letters placed after the name of a person to indicate that the individual holds a position, educational degree, accreditation, office, or honour. An individual may use several different sets of...
appears, Fozzie asks, "What does B.S.C. stand for?", to which Kermit perplexedly replies, "I don't know."