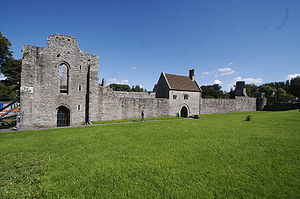 Boyle Abbey was the first successful foundation in Connacht
Connacht
Connacht , formerly anglicised as Connaught, is one of the Provinces of Ireland situated in the west of Ireland. In Ancient Ireland, it was one of the fifths ruled by a "king of over-kings" . Following the Norman invasion of Ireland, the ancient kingdoms were shired into a number of counties for...
of the Cistercian order which had opened its first Irish house at Mellifont, County Louth
County Louth
County Louth is a county of Ireland. It is part of the Border Region and is also located in the province of Leinster. It is named after the town of Louth. Louth County Council is the local authority for the county...
, in 1142.

In the 12th century Malachy of Armagh (later St. Malachy) became aware of two new monastic orders in France, the Cistercians and the Cannons Regular of St. Augustine
St. Augustine
-People:* Augustine of Hippo or Augustine of Hippo , father of the Latin church* Augustine of Canterbury , first Archbishop of Canterbury* Augustine Webster, an English Catholic martyr.-Places:*St. Augustine, Florida, United States...
and he decided to introduce both orders to Ireland in an effort to reform the old Irish church which, both morally and organizationally, had fallen out of line with much of the rest of Christian Europe.

The Cistercians wanted to found an abbey in Moylurg as a daughter house of Mellifont and they did try to find a suitable place. They tried Grellachdinach and Drumcunny. By 1148 the Celtic monastery of ATH-DA-LARAG had either very few monks or none at all. So Taoiseach McGreevy, a local chieftain, negotiated and gave the Celtic monastery of ATH-DA-LARAG in “pure free and perpetual alms” (no strings attached) to the Cistercians. (Documentary evidence shows that the McGreevys were still in this district one hundred years later, ca. 1258.)

The Cistercians were welcomed and given land grants of about 50000 acres (202.3 km²) scattered west of the River Shannon in 27 out-farms called granges. The Cistercians respected their Celtic monastic buildings. They did not demolish them, but joined their own buildings onto the original ones at ATH-DA-LARAG.

This took time and the Cistercian buildings were not completed until ca. 1218 when the abbey was consecrated and called the Abbey of Boyle (Boyle Abbey). The transition may be seen in the architecture, the two styles of buildings etc. and the stump of the Round Tower).

Their initial success was phenomenal, as Mellifont sent out its monks to found one daughter house after another within a decade of its foundation. For some as yet unexplained reason, the Cistercians found it difficult to find a permanent home for themselves in Connacht
Connacht
Connacht , formerly anglicised as Connaught, is one of the Provinces of Ireland situated in the west of Ireland. In Ancient Ireland, it was one of the fifths ruled by a "king of over-kings" . Following the Norman invasion of Ireland, the ancient kingdoms were shired into a number of counties for...
, making three false starts before they finally settled at Boyle
Boyle, County Roscommon
Boyle is a town in County Roscommon, Ireland. It is located at the foot of the Curlew Mountains near Lough Key in the north of the county. Carrowkeel Megalithic Cemetery, the Drumanone Dolmen and the popular fishing lakes of Lough Arrow and Lough Gara are also close by...
in 1161 beside a small river that flows into Lough Key
Lough Key
Lough Key is a lake in Ireland. It is located in the northwest of County Roscommon, northeast of the town of Boyle. The lough's name is believed to come from Cé, a druid; the lake was formed over his grave.-Derivation of name:...
. Their original patrons were the McGreevys, lords of Moylurg and later, after a power struggle, the MacDermott. But, perhaps because money was short, building progress was slow, and the church must have taken about sixty years to complete, going from east to west until the final portion was completed around 1220. The monastery was laid out according to the usual Cistercian plan, a church on the north side of a roughly rectangular cloister area, with a chapter house for meetings of the monks on a second side, a kitchen and a refectory on the third, and probably store houses and dormitory above on the fourth.

But only small parts of the cloister survive, because it was turned into a barracks by the Elizabethans in 1592, and the Cromwellians
Cromwellian conquest of Ireland
The Cromwellian conquest of Ireland refers to the conquest of Ireland by the forces of the English Parliament, led by Oliver Cromwell during the Wars of the Three Kingdoms. Cromwell landed in Ireland with his New Model Army on behalf of England's Rump Parliament in 1649...
who besieged it in 1645. This, along with possible later stone quarrying, ensured that little survives. Despite this, the ruins are impressive, dominated by a squat square tower that was added above the crossing sometime in the thirteenth century. The church adheres to the Cistercian canon in having a nave with side aisles, a transept to the north and south of the crossing, each with a pair of chapels in the east wall, and a chancel, whose original windows were replaced in the thirteenth century. The design was influenced by styles from Burgundy, from whence the Cistercians came to Ireland
Ireland
Ireland is an island to the northwest of continental Europe. It is the third-largest island in Europe and the twentieth-largest island on Earth...
, but much of the detailing of the nave and particularly the cylindrical piers of the south arcade has strong echoes of the West of England. The decorated corbels and capitals belonging to them were probably carved by local masons, some of them members of the so called ‘School of the West’, creating some of the most inventive architectural sculpture of the early thirteenth century in the West of Ireland.

The Abbey is now a national monument
National Monument (Ireland)
The Irish state has officially approved the following List of National Monuments of Ireland. In the Republic of Ireland, a structure or site may be deemed to be a "National Monument", and therefore worthy of state protection, if it is of national importance...
in state care and admission is currently free while restoration work is being carried out. It is located in Boyle, County Roscommon
Boyle, County Roscommon
Boyle is a town in County Roscommon, Ireland. It is located at the foot of the Curlew Mountains near Lough Key in the north of the county. Carrowkeel Megalithic Cemetery, the Drumanone Dolmen and the popular fishing lakes of Lough Arrow and Lough Gara are also close by...
.