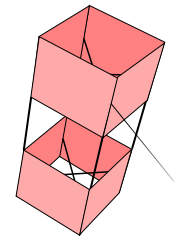 A box kite is a high-performance kite, noted for developing relatively high lift
Lift (force)
A fluid flowing past the surface of a body exerts a surface force on it. Lift is the component of this force that is perpendicular to the oncoming flow direction. It contrasts with the drag force, which is the component of the surface force parallel to the flow direction...
; it is a type within the family of cellular kites. The typical design has four parallel struts. The box is made rigid with diagonal crossed struts. There are two sails, or ribbons, whose width is about a quarter of the length of the box. The ribbons wrap around the ends of the box, leaving the ends and middle of the kite open. In flight, one strut is the bottom, and the bridle is tied between the top and bottom of this strut. The dihedrals of the sails help stability.

The box kite was invented by the Australian Lawrence Hargrave
Lawrence Hargrave
Lawrence Hargrave was an engineer, explorer, astronomer, inventor and aeronautical pioneer.- Early life :Hargrave was born in Greenwich, England, the second son of John Fletcher Hargrave and was educated at Queen Elizabeth's Grammar School, Kirkby Lonsdale, Westmorland...
in 1893 as part of his attempt to develop a manned flying machine. Hargrave linked several of his box kites (Hargrave cells) together, creating sufficient lift for him to fly some 16 ft (4.9 m) off the ground. A winged variant of this kite is known as the Cody kite following its development by Samuel Cody
Samuel Cody
Samuel Franklin Cowdery was born in Birdville, Texas, USA. He was an early pioneer of manned flight, most famous for his work on the large kites known as Cody War-Kites that were used in World War I as a smaller alternative to balloons for artillery spotting...
as a platform for military observation during the Second Boer War
Second Boer War
The Second Boer War was fought from 11 October 1899 until 31 May 1902 between the British Empire and the Afrikaans-speaking Dutch settlers of two independent Boer republics, the South African Republic and the Orange Free State...
. Military uses also involved a kite/radio transmitter combination issued to pilots during World War II
World War II
World War II, or the Second World War , was a global conflict lasting from 1939 to 1945, involving most of the world's nations—including all of the great powers—eventually forming two opposing military alliances: the Allies and the Axis...
for use in liferafts.

Large box kites are constructed as cellular kites. Rather than one box, there are many, each with its own set of sails.

Most of the altitude records for kite flying are held by large box kites, with Dacron sails, flown with Spectra cable. Before Dacron, Spectra and Kevlar
Kevlar
Kevlar is the registered trademark for a para-aramid synthetic fiber, related to other aramids such as Nomex and Technora. Developed at DuPont in 1965, this high strength material was first commercially used in the early 1970s as a replacement for steel in racing tires...
were available, high performance box kites used oiled silk
Silk
Silk is a natural protein fiber, some forms of which can be woven into textiles. The best-known type of silk is obtained from the cocoons of the larvae of the mulberry silkworm Bombyx mori reared in captivity...
, linen
Linen
Linen is a textile made from the fibers of the flax plant, Linum usitatissimum. Linen is labor-intensive to manufacture, but when it is made into garments, it is valued for its exceptional coolness and freshness in hot weather....
or hemp
Hemp
Hemp is mostly used as a name for low tetrahydrocannabinol strains of the plant Cannabis sativa, of fiber and/or oilseed varieties. In modern times, hemp has been used for industrial purposes including paper, textiles, biodegradable plastics, construction, health food and fuel with modest...
sails, and were flown with steel
Steel
Steel is an alloy that consists mostly of iron and has a carbon content between 0.2% and 2.1% by weight, depending on the grade. Carbon is the most common alloying material for iron, but various other alloying elements are used, such as manganese, chromium, vanadium, and tungsten...
cable. Silk, linen and hemp were used because they could be spun finer than cotton
Cotton
Cotton is a soft, fluffy staple fiber that grows in a boll, or protective capsule, around the seeds of cotton plants of the genus Gossypium. The fiber is almost pure cellulose. The botanical purpose of cotton fiber is to aid in seed dispersal....
and stretched relatively little when wet. Steel had the highest available strength for its weight.
The source of this article is wikipedia, the free encyclopedia.  The text of this article is licensed under the GFDL.