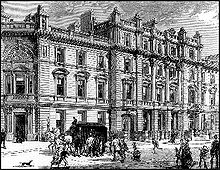 Bow Street Magistrates' Court was the most famous magistrates' court
Magistrates' Court
A magistrates' court or court of petty sessions, formerly known as a police court, is the lowest level of court in England and Wales and many other common law jurisdictions...
in England
England
England is a country that is part of the United Kingdom. It shares land borders with Scotland to the north and Wales to the west; the Irish Sea is to the north west, the Celtic Sea to the south west, with the North Sea to the east and the English Channel to the south separating it from continental...
for much of its existence, and was located in various buildings on Bow Street
Bow Street
Bow Street is a thoroughfare in Covent Garden, Westminster, London. It features as one of the streets on the standard London Monopoly board....
in central
Central London
Central London is the innermost part of London, England. There is no official or commonly accepted definition of its area, but its characteristics are understood to include a high density built environment, high land values, an elevated daytime population and a concentration of regionally,...
London
London
London is the capital city of :England and the :United Kingdom, the largest metropolitan area in the United Kingdom, and the largest urban zone in the European Union by most measures. Located on the River Thames, London has been a major settlement for two millennia, its history going back to its...
close to Covent Garden
Covent Garden
Covent Garden is a district in London on the eastern fringes of the West End, between St. Martin's Lane and Drury Lane. It is associated with the former fruit and vegetable market in the central square, now a popular shopping and tourist site, and the Royal Opera House, which is also known as...
throughout its history.

The first court at Bow Street was established in 1740, when Colonel Sir Thomas de Veil, a Westminster justice, sat as a magistrate
Magistrate
A magistrate is an officer of the state; in modern usage the term usually refers to a judge or prosecutor. This was not always the case; in ancient Rome, a magistratus was one of the highest government officers and possessed both judicial and executive powers. Today, in common law systems, a...
in his home at Number 4. De Veil was succeeded by novelist and playwright Henry Fielding
Henry Fielding
Henry Fielding was an English novelist and dramatist known for his rich earthy humour and satirical prowess, and as the author of the novel Tom Jones....
in 1747, when he became a Justice of the Peace
Justice of the Peace
A justice of the peace is a puisne judicial officer elected or appointed by means of a commission to keep the peace. Depending on the jurisdiction, they might dispense summary justice or merely deal with local administrative applications in common law jurisdictions...
. He was appointed a magistrate for the City of Westminster
City of Westminster
The City of Westminster is a London borough occupying much of the central area of London, England, including most of the West End. It is located to the west of and adjoining the ancient City of London, directly to the east of the Royal Borough of Kensington and Chelsea, and its southern boundary...
in 1748, at a time when the problem of gin
Gin
Gin is a spirit which derives its predominant flavour from juniper berries . Although several different styles of gin have existed since its origins, it is broadly differentiated into two basic legal categories...
consumption and resultant crime was at its height. There were eight licensed premises in the street and Fielding reported that every fourth house in Covent Garden was a gin shop. In 1749, as a response to the call to find an effective means to tackle the increasing crime and disorder, Fielding brought together eight reliable constables, known as "Mr Fielding's People",who soon gained a reputation for honesty and efficiency in their pursuit of criminals. The constables came to be known as the Bow Street Runners
Bow Street Runners
The Bow Street Runners have been called London's first professional police force. The force was founded in 1749 by the author Henry Fielding and originally numbered just six. Bow Street runners was the public's nickname for these officers, "although the officers never referred to themselves as...
. Fielding's blind half-brother, Sir John Fielding
John Fielding
This article is about the London magistrate. For the soldier, see John Williams .Sir John Fielding was a notable English magistrate and social reformer of the 18th century. He was also the younger half-brother of novelist, playwright and chief magistrate Henry Fielding...
(known as the "Blind Beak of Bow Street"), succeeded his brother as magistrate in 1754 and refined the patrol into the first truly effective police force for the capital. The early 19th century saw a dramatic increase in number and scope of the police based at Bow Street with the 1805 formation of the Bow Street Horse Patrole, which covered edge of London and was the first uniformed police unit in Britain, and in 1821 the Dismounted Horse Patrole which covered suburban areas.

When the Metropolitan Police Service
Metropolitan Police Service
The Metropolitan Police Service is the territorial police force responsible for Greater London, excluding the "square mile" of the City of London which is the responsibility of the City of London Police...
was established in 1829, a station house was sited at numbers 25 and 27. In 1876 the Duke of Bedford
Francis Russell, 9th Duke of Bedford
Francis Charles Hastings Russell, 9th Duke of Bedford KG was an English politician and agriculturalist.-Life:...
leased a site on the eastern side of Bow Street to the Commissioners of HM Works and Public Buildings for an annual rent of £100. Work began in 1878 and was completed in 1881—the date of 1879 in the stonework above the door of the present building is the date on which it had been hoped that work would finish.
In its later years, the court housed the office of the Senior District Judge (Magistrates' Courts), who heard high profile matters, such as extradition cases or those involving eminent public figures.

The final case was that of Jason John Handy, a 33-year-old alcoholic-vagrant who was accused of breaching his anti-social behaviour order. He was given a one-month conditional discharge. Ironically, this was an illegal sentence as conditional discharges are not available for ASBO breaches. The unfortunate Mr Handy was therefore detained to be re-sentenced by another court. Other cases on the last day included beggars, shoplifters, illegal minicab drivers and a terrorist hearing—the first of its kind—in which a terror suspect was accused of breaching his control order. The final day was heavily attended by members of the press and some became a little carried away by the slightly festive atmosphere and wrongly reported that a defendant by the name of "Mr Bunbury", who did not attend court, was in fact fictitious and that the case was an elaborate joke on the part of the court and a completely unsuspecting solicitor,Sean Caulfield since Mr Bunbury is a character in a work
The Importance of Being Earnest
The Importance of Being Earnest, A Trivial Comedy for Serious People is a play by Oscar Wilde. First performed on 14 February 1895 at St. James's Theatre in London, it is a farcical comedy in which the protagonists maintain fictitious personae in order to escape burdensome social obligations...
by Oscar Wilde
Oscar Wilde
Oscar Fingal O'Flahertie Wills Wilde was an Irish writer and poet. After writing in different forms throughout the 1880s, he became one of London's most popular playwrights in the early 1890s...
, a previous defendant at Bow Street Magistrates' Court.