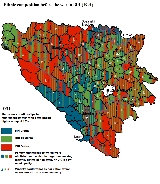 The war came about as a result of the breakup of Yugoslavia.

How many people died in Velika Kladusa?
More
x