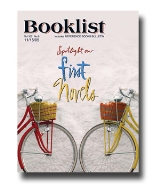 Booklist started publication in January of 1905 to "meet an evident need by issuing a current buying list of recent books with brief notes designed to assist librarians in selection.". "Other features, such as annotated lists on current topics, will probably be added later, and in general, any matter useful to those in charge of smaller libraries will here find an appropriate place." Initially, the journal mainly contained condensed reviews of only a few sentences, but by the 1930s the reviews were a little more in depth. In October 1939, just a few weeks after the start of World War II
World War II
World War II, or the Second World War , was a global conflict lasting from 1939 to 1945, involving most of the world's nations—including all of the great powers—eventually forming two opposing military alliances: the Allies and the Axis...
, Booklist published a very helpful article "Books for the 'Long and Calm View': On the Crisis, Its Background and Implications to the United States" that addressed "the demand for impartial books without the emotionalism of propaganda." The editor wanted to make sure that in the midst of a world crisis, library patrons had their questions answered, and all points of view, given.

Currently, the magazine can be found online, and besides its wide range of current book reviews in a wide range of genres, it also includes lists of current and past winners of awards such as the Newberry
Newberry
Newberry is a surname, a variant of Newbury .- People :* Claude Newberry , South African cricketer* George Newberry , British track cyclist* Hazel Newberry, British dancer* Janet Newberry , American tennis player...
and Printz
Printz
Printz is a family name. Persons and events include:* David Printz, Swedish ice-hockey player* Johan Björnsson Printz, Swedish governor of New Sweden* Stefan Printz-Påhlson, Danish writer* Michael L. Printz Award, named after a Kansas librarian...
. Additionally, optional newsletters are available for librarians and other interested parties to subscribe to to receive even more in-depth reviews not readily available on the website.