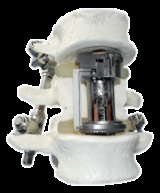 Encyclopedia
The body is the largest part of a vertebra, and is more or less cylindrical in shape. For vertebrates other than humans, this structure is usually called a centrum.

Its upper and lower surfaces are flattened and rough, and give attachment to the intervertebral fibrocartilages, and each presents a rim around its circumference.

In humans, in anterior
Anatomical terms of location
Standard anatomical terms of location are designations employed in science that deal with the anatomy of animals to avoid ambiguities that might otherwise arise. They are not language-specific, and thus require no translation...
view, the body is convex from side to side and concave from above downward. Behind, it is flat from above downward and slightly concave from side to side.

Its anterior surface presents a few small apertures, for the passage of nutrient vessels. On the posterior surface is a single large, irregular aperture, or occasionally more than one, for the exit of the basi-vertebral veins from the body of the vertebra.

The morphology
Morphology (biology)
In biology, morphology is a branch of bioscience dealing with the study of the form and structure of organisms and their specific structural features....
of the anterior and posterior faces of a centrum, where it articulates with other vertebral bodies, partially determine the flexibility and strength of the vertebral column
Vertebral column
In human anatomy, the vertebral column is a column usually consisting of 24 articulating vertebrae, and 9 fused vertebrae in the sacrum and the coccyx. It is situated in the dorsal aspect of the torso, separated by intervertebral discs...
. There are several basic configurations. If both the anterior and posterior surfaces are flat, the vertebra is called "acoelous" or "amphiplatyan"; this type of vertebra is good for dealing with compressive forces. If both surfaces are concave, the vertebra is called "amphicoelous", and permits some motion across a wide range of directions. If the anterior surface is concave and the posterior surface is convex, the vertebra is "procoelous"; the opposite configuration is called "opisthocoelous". Both are varieties of ball-and-socket joints. The ball-and-socket configuration results in less stretching of the spinal cord
Spinal cord
The spinal cord is a long, thin, tubular bundle of nervous tissue and support cells that extends from the brain . The brain and spinal cord together make up the central nervous system...
and thus gives procoelous and opisthocoelous vertebrae greater flexibility than acoelous and amphicoelous vertebrae. Finally, vertebrae with saddle
Saddle
A saddle is a supportive structure for a rider or other load, fastened to an animal's back by a girth. The most common type is the equestrian saddle designed for a horse, but specialized saddles have been created for camels and other creatures...
-shaped articular surfaces are called "heterocoelous", which allows vertebrae to flex vertically and horizontally, while preventing twisting motions. Such vertebrae are found in the necks of birds and some turtles.
The source of this article is wikipedia, the free encyclopedia.  The text of this article is licensed under the GFDL.