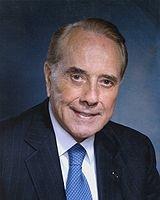 As long as there are only 3 to 4 people on the floor, the country is in good hands. It's only when you have 50 to 60 in the Senate that you want to be concerned.

[about his wife, Elizabeth] At least she's the president of something, which is more than I can say.

Elizabeth's back at the Red Cross, and I'm walking the dog.

History buffs probably noted the reunion at a Washington party a few weeks ago of three ex-presidents: Jimmy Carter|Carter, Gerald Ford|Ford and Richard Nixon|Nixon - See No Evil, Hear No Evil and Evil.

I mean, there's always somebody in somebody's administration who jumps out early, sells a book, and goes after the guy who hired him, ... I don't know if that's good. It may be good business; it's not good politics.

I think the voters believe that when you become president of the United States, you have a higher obligation and a higher standard than anybody in the world, ... And if you violate that standard, they're going to remember it on election day.

I've won every battle, except the battle against time... yet.

If something happened along the route and you had to leave your children with Bob Dole or Bill Clinton, I think you would probably leave them with Bob Dole.

Our intent will not be to create gridlock. Oh, except maybe from time to time.