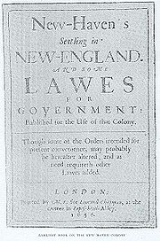 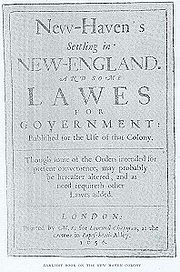 The Blue Laws of the Colony of Connecticut, as distinct from the generic term "blue law
Blue law
A blue law is a type of law, typically found in the United States and, formerly, in Canada, designed to enforce religious standards, particularly the observance of Sunday as a day of worship or rest, and a restriction on Sunday shopping...
" that refers to any laws regulating activities on Sunday, were the initial statutes set up by the Gov. Theophilus Eaton
Theophilus Eaton
Theophilus Eaton was a merchant, farmer, and Puritan colonial leader who was the co-founder and first governor of New Haven Colony, Connecticut.-Early life and first marriage:...
with the assistance of the Rev. John Cotton in 1655 for the Colony of New Haven
New Haven Colony
The New Haven Colony was an English colonial venture in present-day Connecticut in North America from 1637 to 1662.- Quinnipiac Colony :A Puritan minister named John Davenport led his flock from exile in the Netherlands back to England and finally to America in the spring of 1637...
, now part of Connecticut. After the laws were approved, they were printed in London, England, in 1656 and distributed to households in New Haven.

A facsimile of the first page of these Blue Laws is shown in the accompanying image. These New Haven codes, though they were not of Connecticut per se, were almost entirely copied from the existing Code of 1650 that the Colony of Connecticut had already drafted, and subsequent historians and authors tend not to distinguish the difference.

Although there has been much commotion made about the harshness of the Blue Laws of Connecticut, it seems that they are the perpetuation of an incredible hoax by the Reverend Samuel Peters, an Anglican that was forced to leave America during the Revolution. He made up examples of "Blue Laws" in a booklet in order to make America appear backwards and fanatical. Below are the supposed laws that once existed: