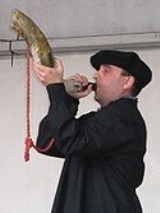 The blowing horn or winding horn is a sound device by and large shaped like a horn or actually a cattle or other animal horn arranged to blow from a hole in the pointed end of it. (See also, "Side Blown Horns") This rudimentary device had in former times a variety of functions in many countries where nowadays has lost ground to modern society, in most cases reducing its scope to exhibiting, celebratory or group identification purposes. On the other hand, it has kept its function and profile in many cattle raising, agricultural and fruit gathering/hunter societies.

The oldest ones were wood and animal horns (usually ovids and bovids). Yet the fact remains that earliest findings in Europe are metal made horns (Bronze Age) on the strength of its better endurance of the rigour of time. As a result, previous traces of other materials have vanished, so the oldest surviving animal horn dates back to the late Iron Age in Visnum, Sweden. As big horned animals are rarely found in Scandinavia, blowing horns are often made from wood, wound birch bark or bout, called a "lur".

Many horns have been used as sounding cries by ancient societies. A modern day descendant of the horn, the bugle
Bugle (instrument)
The bugle is one of the simplest brass instruments, having no valves or other pitch-altering devices. All pitch control is done by varying the player's embouchure, since the bugle has no other mechanism for controlling pitch. Consequently, the bugle is limited to notes within the harmonic series...
, is used to call out orders in military camps. The hunting horn was used to flush game and is still used today in some places.

In Biscay
Biscay
Biscay is a province of Spain and a historical territory of the Basque Country, heir of the ancient Lord of Biscay. Its capital city is Bilbao...
, territory of the Basque Country
Basque Country (historical territory)
The Basque Country is the name given to the home of the Basque people in the western Pyrenees that spans the border between France and Spain on the Atlantic coast....
, following an old tradition, a practice is being restored to blow the horn from five mountains in the province once a year. These mountains, namely Gorbea
Gorbea
Gorbea or Gorbeia is a mountain and massif, the highest in Biscay and Alava , with a height of 1,481 m AMSL. The massif covers a wide area between the two provinces. The main mountain is a round grass-covered summit where a 20-metre-tall metallic cross has been constructed to reach the altitude of...
(4,859 ft.), Sollube (2,251 ft), Oiz
Oiz
Mount Oiz , is one of the most popular summits of Biscay in the Basque Country . Its summits form part of a long range that feeds several rivers: Ibaizabal, Artibai, Lea, Oka and Deva in Gipuzkoa all of them running to the Bay of Biscay....
(3,376 ft.), Ganekogorta
Ganekogorta
Ganekogorta is a mountain in the border of the provinces of Biscay and Alava , just between Bilbao and Llodio. It has a height of 998 m AMSL and it's the main peak of a massif that comprises some smaller mountains like Pagasarri, Ganeta, Pasatorenkorta, Arnotegi or Arraiz...
(3,274 ft) and Kolitza (2,884 ft) are dubbed the montes bocineros, meaning the 'hornblower mounts'. According to historic evidence, up to the late 16th century the Biscayne were summoned to the General Council of the Domain of Biscay to be held in the town of Gernika by playing horns from the summits.

A like function may be attributed to the pututu, the sound instrument from the Andes. The device, usually made of a shell or hollowed out cow horn, is used to summon people to a meeting or a festival. In the Inca period, the messengers spreading throughout Empire known as chaski
Chaski
The Chasquis were agile and highly-trained runners that delivered messages, royal delicacies such as fish and other objects throughout the Inca Empire, principally in the service of the Sapa Inca....
carried along a pututu, which was blown to herald their arrival to a particular place.

Cheap plastic
Plastic
A plastic material is any of a wide range of synthetic or semi-synthetic organic solids used in the manufacture of industrial products. Plastics are typically polymers of high molecular mass, and may contain other substances to improve performance and/or reduce production costs...
vuvuzela
Vuvuzela
The vuvuzela , also known as lepatata Mambu , colloquially known in South Africa as "Moerstripper", is a plastic horn, about long, which produces a loud monotone note, typically around B3 . Some models are made in two parts to facilitate storage, and this design also allows pitch variation...
s achieved fame and controversy in the hands of football supporters during the 2010 World Cup in South Africa
South Africa
The Republic of South Africa is a country in southern Africa. Located at the southern tip of Africa, it is divided into nine provinces, with of coastline on the Atlantic and Indian oceans...
.

One of the more widespread uses for blowing horns today is the shofar
Shofar
A shofar is a horn, traditionally that of a ram, used for Jewish religious purposes. Shofar-blowing is incorporated in synagogue services on Rosh Hashanah and Yom Kippur.Shofar come in a variety of sizes.- Bible and rabbinic literature :...
, a ram or Kudu horn with a hole drilled through it. The shofar is used mainly for Jewish ceremonies such as Rosh Hashana. Horns are sometimes used in the other two abrahamic religions also. Similarly, the dungchen
Dungchen
The dungchen is a long trumpet or horn used in Tibetan Buddhist ceremonies. It is the most widely used instrument in Tibetan Buddhist culture. It is often played in pairs or multiples, and the sound is compared to the singing of elephants...
is a ritual horn used in Tibetan Buddhism
Tibetan Buddhism
Tibetan Buddhism is the body of Buddhist religious doctrine and institutions characteristic of Tibet and certain regions of the Himalayas, including northern Nepal, Bhutan, and India . It is the state religion of Bhutan...
. In modern Neo Pagans the blowing horn is used to call the horned lord.