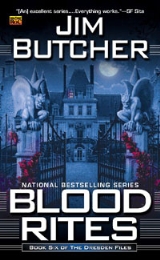 Encyclopedia
Blood Rites is the 6th book in The Dresden Files
The Dresden Files
The Dresden Files is a series of contemporary fantasy/mystery novels written by Jim Butcher.He provides a first person narrative of each story from the point of view of the main character, private investigator and wizard Harry Dresden, as he recounts investigations into supernatural disturbances in...
, Jim Butcher
Jim Butcher
Jim Butcher is a New York Times Best Selling author most known for his contemporary fantasy book series The Dresden Files. He also wrote the Codex Alera series. Butcher grew up as the only son of his parents, and has two older sisters. He currently lives in Independence with his wife, Shannon K...
's continuing series about wizard detective Harry Blackstone Copperfield Dresden.

After accidentally acquiring a stray puppy from a kidnapped litter of Tibetan temple dogs, Harry Dresden accepts a job from his White Court acquaintance, Thomas Raith, to investigate a series of deaths on a pornography film set lead by director Arturo Genosa. After an entropy curse arrives and almost kills two more people, Lara Raith, another White Court vampire, appears as a replacement actress, discovers Dresden's presence, and soon decides to kill both Harry and Thomas for being involved. However, a surprise Black Court attack forces a truce between them and they flee to the Raith's Chicago mansion for safety. There, Dresden learns that Thomas is his half-brother and escapes an assassination attempt by Lord Raith, Thomas' and Lara's father. Soon after, Dresden finds a pattern to the curses and prepares a counterattack, but one of Genosa's ex-wives prevents him from saving the next target and frames him for the woman's death. He escapes and works out that all of Genosa's ex-wives are behind the curse, with Lord Wraith supporting them. Before the next curse can be unleashed against him, Dresden calls upon Murphy to help him stop Lord Wraith and maneuvers Lara to save them all from her father.

At the same time, Harry has discovered a newly-established nest of Black Court vampires, lead by a very old and dangerous vampire named Mavra. To wipe out the nest before it becomes entrenched, he enlists the help of his friend Karrin Murphy, the mercenary Jared Kincaid, and his mentor Ebenezar McCoy, but discovers that Kincaid and McCoy have already met. Despite almost getting blown up and burned to death, the crew successfully battle Mavra, destroy the nest, and rescue the children that had been taken as hostages. At the end, Thomas saves Harry by paying Kincaid's fee using his entire savings.

Dresden and Thomas, after meeting for dinner, rescue a litter of pups from a group of demon gorillas, and deliver them to Brother Wang's, their owner, just as he is leaving. On the ride home Dresden finds another pup hiding in the car, who alerts Dresden to a vampire attack. The puppy fits comfortably in Dresden's duster pocket, so he brings the puppy along for the ride until he can return it to Brother Wang.

Thomas introduces Dresden to a friend, Arturo Genosa, who produces movies. Arturo hires Dresden to investigate the suspicious deaths of two women. Dresden will pose as a production assistant to investigate and apprehend the murderer along with Thomas.

Mavra and her scourge of vampires are in town, complicating Dresden's life. He survives their first attack. Dresden makes an uncharacteristic decision to exterminate them before they can kill him. He enlists Murphy to help him hunt down and destroy the vampires on Saturday - and babysit the puppy. Dresden needs more muscle for the vampire hunt, so he hires Kincaid, the mercenary who works as The Archive's bodyguard.

The next day, Dresden shows up early at the film studio. When the next curse hits the studio, Dresden is able to intervene and save the lives of two of the stars. Dresden realizes that Arturo is not the target of the curses, but the women in his life.

One of the replacement actresses is the supernaturally-attractive Lara Romany (Lara Raith, a White Court vampire), along with her sister Inari and Thomas. Lara decides that Dresden must die - and Thomas, too. She shoots Thomas. Before she can shoot Dresden, they are jumped by Mavra's minions. Lara and Dresden agree to a 24-hr truce.

Thomas is dying, as he used up his energy reserves in the fight. Inari's arm is shattered. Lara and Dresden evacuate them to the Raith mansion for medical attention. Lara offers Dresden the hospitality and protection of her home. Lord Raith, her father and the King of the White Court vampires, is not bound by her word. Later, Raith sends a drugged Inari to feed on Dresden, but she is burned by touching him.

Thomas arrives just in time to hustle Inari away, and explains that Dresden is still protected by Susan's love. In Lord Raith's gallery, he shows Dresden the painting of their mother, Margaret Gwendolyn LeFay. Thomas is Dresden's half-brother, which Harry does not believe. Still disbelieving, Dresden soulgazes Thomas. During the soulgaze, they both receive a planted message from their mother: help each other. Dresden agrees to help Thomas save Inari from Lord Raith.

But first, Dresden needs to deal with Mavra; and then, he needs to head off the next attack of the entropy curse. Dresden meets Kincaid and Lt. Murphy at the IHOP to coordinate the raid on Mavra, before hurrying back to the studio to prevent the next curse. He drafts Jake into helping draw a magical lightning rod. While they are inscribing it on the floor with chalk, Jake lets it drop that Arturo is getting married for the fourth time. With the lightning rod done, Dresden phones Murphy. She confirms that Arturo has a marriage license for Thursday. The fax is blurred, so she cannot read the name of the bride-to-be. Unlike the prior three wives, this Mrs. Genosa was not required to sign a pre-nuptial agreement. If Arturo dies, she will inherit everything, which is the motive.

Then Trixie surprises him at gunpoint, so he cannot interfere with the curse. Trixie and her co-conspirators have no idea who Arturo is marrying, so they are killing all the women around him. The next curse will kill Emma. Desperate to save her, Dresden jumps Trixie. She fires wildly, killing Emma.

Trixie screams that Dresden killed Emma. The entire cast and crew see him holding the gun. Dresden doesn't have time to talk to Chicago PD. He needs that time to take out Mavra and her scourge. Dresden hands the gun off to Joan as he runs out the door, giving her a brief synopsis of what Trixie has done.

Back as his apartment, Bob gives Dresden the location and a site map of the vampire hideout. Mavra is in the basement of a homeless shelter, so she and her kind can feed on people who won't be missed. The wheelman for Dresden's raid arrives. It's Dresden's mentor and former teacher, Ebenezar McCoy. He agrees to help dampen Mavra's sorcerous powers, as well as drive the getaway truck. They pick up Murphy from her family picnic and rendezvous with Kincaid.

Kincaid and Ebenezar know each other from before, and share mutual hatred. Kincaid calls Ebenezar a "Blackstaff." A term for a wizard allowed by the council to kill with magic. Harry is shocked. They give their word to Dresden for a temporary truce, so they can shut down Mavra and her scourge. Impersonating Red Cross workers, Kincaid and Murphy evacuate the homeless people and shelter staff from the ground floor. Ebenezar keeps the truck running, while they go into the basement lair.

They locate the vampire's food supply, but are surprised by Marva and her henchmen, who douse them with napalm, setting the building on fire. Dresden's shield protects them, but it absorbs the heat energy, incinerating his left hand. After killing the henchmen, Dresden shoots Mavra with a paintball gun loaded with alternating rounds of holy water and garlic, doing a great deal of damage to Mavra, Kincaid moves closer and beheads Mavra and the other vampires. Gathering the children, they flee the burning building.

Kincaid gives Dresden three days to pay him or die. Kincaid leaves to take another contract. Murphy and Dresden take the rescued children to Fr. Forthill. Ebenezar explains that a Blackstaff is the White Council's assassin. Also, he tells Dresden that his mother, Margaret LeFay, was his apprentice. And finally, Margaret was murdered by Lord Raith.

Dresden figures out the identities of Trixie's accomplices, as well as their sponsor. Dresden and Murphy take on the sponsor - Lord Raith - for the murder of Margaret and the entropy-cursed movie starlets. The confrontation in the Deeps, a cavern system near Chicago, ends the entropy curse and culminates in a coup. Lara displaces Lord Raith. She makes her father into a puppet, so their enemies won't see any weakness in House Raith or the White Court.

Banished from House Raith, Thomas moves into Dresden's apartment. He proves his usefulness by doing needful things. He acquires painkillers for Dresden's burned hand. He pays off the mercenary Kincaid, so Dresden wouldn't be executed for non-payment.