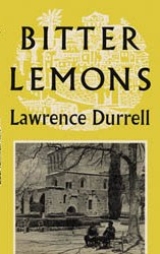 Encyclopedia
Bitter Lemons is an autobiographical
Autobiography
An autobiography is a book about the life of a person, written by that person.-Origin of the term:...
work by writer Lawrence Durrell
Lawrence Durrell
Lawrence George Durrell was an expatriate British novelist, poet, dramatist, and travel writer, though he resisted affiliation with Britain and preferred to be considered cosmopolitan...
, describing the three years (1953–1956) he spent on the island of Cyprus
Cyprus
Cyprus , officially the Republic of Cyprus , is a Eurasian island country, member of the European Union, in the Eastern Mediterranean, east of Greece, south of Turkey, west of Syria and north of Egypt. It is the third largest island in the Mediterranean Sea.The earliest known human activity on the...
. The book was awarded the Duff Cooper Prize
Duff Cooper Prize
The Duff Cooper Prize is a literary prize awarded annually for the best work of history, biography, political science or poetry, published in English or French. The prize was established in honour of Duff Cooper, a British diplomat, Cabinet member and acclaimed author. The prize was first awarded...
for 1957, the second year the Prize was awarded.

Durrell moved to Cyprus in 1953 following several years spent working for the British Council in Argentina and the Foreign Office in Yugoslavia
Yugoslavia
Yugoslavia refers to three political entities that existed successively on the western part of the Balkans during most of the 20th century....
. Having relinquished government employment, Durrell wanted to plunge himself once more into writing, and was looking to return to the Mediterranean world he had experienced in Corfu
Corfu
Corfu is a Greek island in the Ionian Sea. It is the second largest of the Ionian Islands, and, including its small satellite islands, forms the edge of the northwestern frontier of Greece. The island is part of the Corfu regional unit, and is administered as a single municipality. The...
and Rhodes
Rhodes
Rhodes is an island in Greece, located in the eastern Aegean Sea. It is the largest of the Dodecanese islands in terms of both land area and population, with a population of 117,007, and also the island group's historical capital. Administratively the island forms a separate municipality within...
. He had hoped that he would be able to purchase a house in an affordable location and write. Although Durrell must have experienced personal difficulties—his wife, Eve, was undergoing treatment for mental illness and had left him in charge of his young daughter, Sappho (born 1951) - the book does not mention these people or incidents, aside from a few oblique references to his daughter.

In 1956, he abandoned his home on the island and left Cyprus very rapidly for a very brief residence in the UK, quickly relocating to France for the remaining three decades of his life. Durrell later returned to discussions of Cyprus in 1974 in an article in the Daily Mail, but he otherwise said little about Cyprus after his departure.

The book is alternately comic and serious, charting Durrell's experiences on Cyprus
Cyprus
Cyprus , officially the Republic of Cyprus , is a Eurasian island country, member of the European Union, in the Eastern Mediterranean, east of Greece, south of Turkey, west of Syria and north of Egypt. It is the third largest island in the Mediterranean Sea.The earliest known human activity on the...
and the people he met and befriended, as well as charting the progress of the Cypriot "Enosis
Enosis
Enosis refers to the movement of the Greek-Cypriot population to incorporate the island of Cyprus into Greece.Similar movements had previously developed in other regions with ethnic Greek majorities such as the Ionian Islands, Crete and the Dodecanese. These regions were eventually incorporated...
" (union with Greece
Greece
Greece , officially the Hellenic Republic , and historically Hellas or the Republic of Greece in English, is a country in southeastern Europe....
and freedom from British rule) movement, which plunged the island into chaos and violence. Comic moments include Durrell's successful house-buying adventure, and the visits of his mother and brother, naturalist Gerald Durrell
Gerald Durrell
Gerald "Gerry" Malcolm Durrell, OBE was a naturalist, zookeeper, conservationist, author and television presenter...
. Durrell settled in the village of Bellapais
Bellapais
Bellapais is a small village in the Turkish-controlled Northern Cyprus, about four miles from the town of Kyrenia. The village was the home for some years of Lawrence Durrell, who wrote about life in Cyprus in his book Bitter Lemons. He mentions passing the time drinking coffee under the Tree of...
(purposely spelt "Bellapaix" by Durrell to evoke the old name Paix), in , which is now part of the Turkish-controlled Northern Cyprus.

During his stay, Durrell worked first as an English teacher at the Pancyprian Gymnasium
Pancyprian Gymnasium
The Pancyprian Gymnasium was founded in 1812 by Archbishop Kyprianos at a time when Cyprus was still under Ottoman occupation. It was originally called the Hellenic School and is the oldest high school still in operation on the island...
, where several of his female students reportedly fell in love with him:

Invited to write an essay on her favourite historical character, [Electra] never failed to delight me with something like this: 'I have no historical character but in the real life there is one I love. He is writer. I dote him and he dotes me. How pleasure is the moment when I see him came at the door. My glad is very big.

Eventually, however, "the vagaries of fortune and the demons of ill luck dragged Cyprus into the stock-market of world affairs" and as armed groups emerged demanding an end to British rule and Cyprus' reunion with Greece, Durrell accepted a job as press adviser to the British governor. Durrell was not enamoured with the Cypriot militants, however, and felt that they were dragging the island to a "feast of unreason" and that "embedded so deeply in the medieval compost of religious hatreds, the villagers floundered in the muddy stream of undifferentiated hate like drowning men." The account ends with him fleeing the island without saying goodbye to his friends, approaching the "heavily guarded airport" by taxi in conversation with the driver who tells him "Dighenis, though he fights the British, really loves them. But he will have to go on killing them -- with regret, even with affection."
The source of this article is wikipedia, the free encyclopedia.  The text of this article is licensed under the GFDL.