Encyclopedia
Bishopsbourne is a small village
Village
A village is a clustered human settlement or community, larger than a hamlet with the population ranging from a few hundred to a few thousand , Though often located in rural areas, the term urban village is also applied to certain urban neighbourhoods, such as the West Village in Manhattan, New...
in Kent
Kent
Kent is a county in southeast England, and is one of the home counties. It borders East Sussex, Surrey and Greater London and has a defined boundary with Essex in the middle of the Thames Estuary. The ceremonial county boundaries of Kent include the shire county of Kent and the unitary borough of...
, England
England
England is a country that is part of the United Kingdom. It shares land borders with Scotland to the north and Wales to the west; the Irish Sea is to the north west, the Celtic Sea to the south west, with the North Sea to the east and the English Channel to the south separating it from continental...
. It lies in the Nailbourne
Little Stour
The Little Stour is one of the tributaries of the River Stour in the English county of Kent. The upper reaches of the river are better known as the Nailbourne, whilst the lower reaches were once known as the Seaton Navigation....
valley some 4 miles (6 km) from Canterbury
Canterbury
Canterbury is a historic English cathedral city, which lies at the heart of the City of Canterbury, a district of Kent in South East England. It lies on the River Stour....
and about 15 miles (24 km) from Dover
Dover
Dover is a town and major ferry port in the home county of Kent, in South East England. It faces France across the narrowest part of the English Channel, and lies south-east of Canterbury; east of Kent's administrative capital Maidstone; and north-east along the coastline from Dungeness and Hastings...
. It has a public house, The Mermaid, built in 1861, and a church, St Mary's, with 14th-century wall paintings. Author Joseph Conrad
Joseph Conrad
Joseph Conrad was a Polish-born English novelist.Conrad is regarded as one of the great novelists in English, although he did not speak the language fluently until he was in his twenties...
lived here and his house, "Oswalds", still stands. The author Jocelyn Brooke
Jocelyn Brooke
Jocelyn Brooke was an English author born in Kent. He wrote several unusual and semi-autobiographical novels as well as some poetry...
lived in a house called "Forge House", just opposite the village hall
Village hall
In the United States, a village hall is the seat of government for villages. It functions much as a city hall does within cities.In the United Kingdom, a village hall is usually a building within a village which contains at least one large room, usually owned by and run for the benefit of the local...
, which is called "Conrad Hall" in Conrad's honour. Bishopsbourne was on the Elham Valley Railway
Elham Valley Railway
The Elham Valley Railway is a disused railway line that runs through the Elham Valley connecting Folkestone and Canterbury in East Kent. It was operational from 1887 to 1947.- History :...
until traffic stopped in 1947, the original railway station is now a private residence.

In 1844 an excavation at nearby Bourne Park revealed Iron Age
Iron Age
The Iron Age is the archaeological period generally occurring after the Bronze Age, marked by the prevalent use of iron. The early period of the age is characterized by the widespread use of iron or steel. The adoption of such material coincided with other changes in society, including differing...
remains. Mozart visited Bourne Park House in 1765. 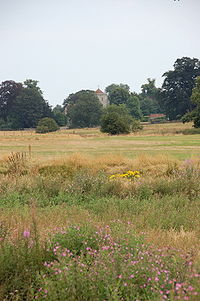 Richard Hooker
Richard Hooker
Richard Hooker was an Anglican priest and an influential theologian. Hooker's emphases on reason, tolerance and the value of tradition came to exert a lasting influence on the development of the Church of England...
was the Rector from 1595 to 1600. Hooker played a significant part in the development of Anglicanism, championing a 'middle way' between Puritanism and Catholicism. His 8-volume work 'The Laws of Ecclesiastical Polity' was partly written in the Rectory at Bishopsbourne. After his death, he was buried in the Chancel of the church, and a memorial to him was provided by William Cowper.

Photographic
Photography
Photography is the art, science and practice of creating durable images by recording light or other electromagnetic radiation, either electronically by means of an image sensor or chemically by means of a light-sensitive material such as photographic film...
pioneer Joseph Bancroft Reade
Joseph Bancroft Reade
Rev. Joseph Bancroft Reade FRS was an English clergyman, amateur scientist and pioneer of photography.-Early life:...
was rector
Rector
The word rector has a number of different meanings; it is widely used to refer to an academic, religious or political administrator...
from 1863 until his death in 1870, and is buried at St Mary's.

On 30th August, 1940, a Spitfire piloted by Sgt J I Johnson
Joseph I. Johnson
Joseph Inkerman Johnson was born in 1914 in Hulcote, Northamptonshire. He joined the RAF in June 1935 as an Aircrafthand . He was later remustered as an Airman-in training Pilot and won his wings on 11 August 1939 — three weeks before Britain declared war on Germany.In May 1940 Sgt. Johnson was...
was shot down and crashed near Bishopsbourne. The pilot was killed.