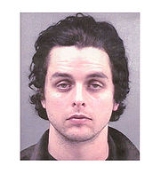 Overview
Billie Joe Armstrong is an American rock
Rock music
Rock music is a genre of popular music that developed during and after the 1960s, particularly in the United Kingdom and the United States. It has its roots in 1940s and 1950s rock and roll, itself heavily influenced by rhythm and blues and country music...
musician and occasional actor
Actor
An actor is a person who acts in a dramatic production and who works in film, television, theatre, or radio in that capacity...
, best known as the lead vocalist, main songwriter
Songwriter
A songwriter is an individual who writes both the lyrics and music to a song. Someone who solely writes lyrics may be called a lyricist, and someone who only writes music may be called a composer...
and lead guitarist
Guitarist
A guitarist is a musician who plays the guitar. Guitarists may play a variety of instruments such as classical guitars, acoustic guitars, electric guitars, and bass guitars. Some guitarists accompany themselves on the guitar while singing.- Versatility :The guitarist controls an extremely...
for the American punk rock
Punk rock
Punk rock is a rock music genre that developed between 1974 and 1976 in the United States, the United Kingdom, and Australia. Rooted in garage rock and other forms of what is now known as protopunk music, punk rock bands eschewed perceived excesses of mainstream 1970s rock...
band Green Day
Green Day
Green Day is an American punk rock band formed in 1987. The band consists of lead vocalist and guitarist Billie Joe Armstrong, bassist and backing vocalist Mike Dirnt, and drummer Tre Cool...
. He is also a guitarist and vocalist for the punk rock band Pinhead Gunpowder
Pinhead Gunpowder
Pinhead Gunpowder is an American punk rock band formed East Bay, California, in 1990. The band has consisted of Aaron Cometbus , Bill Schneider , Billie Joe Armstrong and Jason White for the majority of its existence...
and provides lead vocals for Green Day's side project Foxboro Hot Tubs
Foxboro Hot Tubs
The Foxboro Hot Tubs band is a side project of Green Day. All members of the band perform live with Green Day . Their debut album, Stop Drop and Roll!!! was released on April 22, 2008....
.

Raised in Rodeo, California
Rodeo, California
Rodeo is a census-designated place located in Contra Costa County, California on the shore of San Pablo Bay. The population was 8,679 at the 2010 census. The town is named for the livestock roundups common in the late 19th century...
, Armstrong developed an interest in music at a young age, and recorded his first song at the age of five.