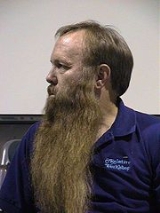 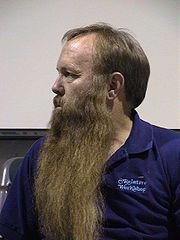 Bill Booth is an engineer, inventor, serious beard aficionado and entrepreneur in the skydiving equipment manufacturing industry. His invention of the 3-ring release
3-ring release system
The 3-ring release system is a parachute component that is widely used by sport skydivers to attach the two risers of a main parachute to the harness that bears the load under the parachute....
safety device greatly enhanced skydiving safety. This device allows the rapid release of the skydiver's main parachute in the event of a malfunction. Currently, all sport skydiving equipment and some military systems employ this design.

Bill also invented the throw-out pilot chute
Pilot chute
A pilot chute is a small auxiliary parachute used to deploy the main or reserve parachute. The pilot chute is connected to the deployment bag containing the parachute by a bridle. On modern skydiving rigs three types of pilot chutes can be found:...
. A pilot chute is a small parachute used to extract and deploy a main parachute. The throw-out approach replaces the spring-loaded pilot chute which was released by a rip-cord. The throw-out system allows the skydiver to deploy his or her pilot chute directly into the air stream. Other inventions include the Skyhook RSL safety device and the "Sigma System" for tandem
Tandem skydiving
Tandem skydiving or tandem parachuting refers to a type of skydiving where a student skydiver is connected via a harness to a tandem instructor. The instructor guides the student through the whole jump from exit through freefall, piloting the canopy, and landing. The student needs only minimal...
drogue release.

Bill founded The Relative Workshop, the sport skydiving equipment manufacturer that pioneered modern parachute systems with its introduction of the WonderHog harness/container system. The WonderHog was so named because of the 'piggy-back' design with the reserve container located above the main container on the back of the skydiver instead of the belly-mounted reserve seen on earlier systems. The Relative Workshop has changed its name and is now called Uninsured United Parachute Technologies, LLC.

Bill was also instrumental in obtaining FAA recognition of the tandem jump
Tandem skydiving
Tandem skydiving or tandem parachuting refers to a type of skydiving where a student skydiver is connected via a harness to a tandem instructor. The instructor guides the student through the whole jump from exit through freefall, piloting the canopy, and landing. The student needs only minimal...
as a means of teaching skydiving. From 1984 to 2001, tandem skydiving was possible in the US only as an "volunteer experimental test jumper" under exemptions to FAA rules, due to the "one person, two parachutes" definition of parachuting.

Bill's efforts toward increasing skydiving safety have earned him the respect and appreciation of the skydiving industry. In addition to appearing in his own tandem parachute waiver and briefing video used to oriented new skydiving students, Bill was also invited to appear in cameo roles in two Hollywood films: The Firm and Cutaway.

In 1972, Bill Booth started the Relative Workshop in a Miami garage. In the late 1970s Bill made two major contributions to the world of skydiving. First he invented and patented the Hand Deploy Pilot Chute System, which soon changed the sport forever. The second invention, and perhaps Bill's greatest contribution to the sport, was the invention the 3-Ring Release System. In 1983, Bill received the prestigious Parachute Equipment Industry Association Achievement Award. The Federation Aeronautic International awarded him the 1984 Gold Medal for outstanding achievement in parachute safety design, the highest award available in his field.

The Relative Workshop's first harness/container system was called the Wonderhog. This rig incorporated all of the best safety improvements of its era. The Wonderhog Sprint quickly followed. In 1980, the Vector was introduced and soon became the most popular rig in the world. The U.S. Skydiving Team wore the first Vectors at the 1981 World Meet. The Vector II followed six years later and enjoyed even more popularity.

In the late 1980s and early 1990s, new freefall disciplines made their way into the skydiving mainstream-SkySurfing and FreeStyle were soon followed by FreeFlying. These new disciplines brought with them new concerns. In these flight modes, the container is subjected to direct, high-speed airflow from every direction. The need for more security, such as riser, pin, and bridle protection became apparent.