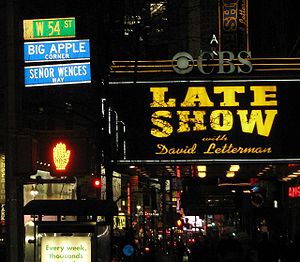 "The Big Apple" is a nickname for New York City
New York City
New York is the most populous city in the United States and the center of the New York Metropolitan Area, one of the most populous metropolitan areas in the world. New York exerts a significant impact upon global commerce, finance, media, art, fashion, research, technology, education, and...
. It was first popularized in the 1920s by John J. Fitz Gerald
John J. Fitz Gerald
John Joseph Fitz Gerald was a turf racing writer for the New York Morning Telegraph, from 1912 to 1940 , serving as turf editor for the last 15 years...
, a sports writer for the New York Morning Telegraph. Its popularity since the 1970s is due to a promotional campaign by the New York Convention and Visitors Bureau, known now as NYC & Company
NYC & Company
NYC & Company, a private non-profit corporation, is the official tourism marketing organization for New York City. The organization was formed in 1999 through the combination of the New York Convention & Visitors Bureau and with New Yorkers for New York: the Permanent Host Committee, a business...
.


The nickname of New York

Although the history of the Big Apple was once thought a mystery, research over the past two decades, primarily by amateur etymologist Barry Popik
Barry Popik
Barry Popik is an American etymologist who is recognized as an expert on the origins of the terms "Big Apple", "Windy City," "hot dog," and many other food and slang terms; he is a consulting editor of the Oxford Encyclopedia of Food and Drink in America and was described in The Wall Street...
and Gerald Cohen of Missouri University of Science and Technology
Missouri University of Science and Technology
Missouri University of Science and Technology is an institution of higher learning located in Rolla, Missouri, United States, and part of the University of Missouri System...
, has provided a reasonably clear picture of the term's history. Previously, there were a number of false etymologies, including a claim that the term derived from a New York brothel whose madam was known as Eve. This was subsequently exposed as a hoax and has been replaced on the source web site with more accurate information.

The earliest citation for "big apple" is the 1909 book The Wayfarer in New York, by Edward Martin
Edward Martin
Edward Martin was an American lawyer and Republican party politician from Waynesburg, Pennsylvania.Martin was born at Ten Mile, Pennsylvania. He attended public schools and graduated from Waynesburg College in Waynesburg, Pennsylvania, in 1901. He studied law, was admitted to the bar in 1905 and...
, writing: "Kansas is apt to see in New York a greedy city. . . . It inclines to think that the big apple gets a disproportionate share of the national sap" (emphasis added). William Safire
William Safire
William Lewis Safire was an American author, columnist, journalist and presidential speechwriter....
considered this the coinage, but the Random House Dictionary of American Slang considers the usage "metaphorical or perhaps proverbial, rather than a concrete example of the later slang term", and Popik likewise does not consider this the coinage.

J. P. Smith, with Tippity Witchet and others of the L. T. Bauer string, is scheduled to start for "the big apple" to-morrow after a most prosperous Spring campaign at Bowie and Havre de Grace.

Fitz Gerald referred to the "big apple" frequently thereafter. He explained his use in a February 18, 1924, column under the headline "Around the Big Apple":

The Big Apple. The dream of every lad that ever threw a leg over a thoroughbred and the goal of all horsemen. There's only one Big Apple. That's New York.

Two dusky stable hands were leading a pair of thoroughbred around the "cooling rings" of adjoining stables at the Fair Grounds in New Orleans and engaging in desultory conversation.

"Where y'all goin' from here?" queried one.

"From here we're headin' for The Big Apple," proudly replied the other.

"Well, you'd better fatten up them skinners or all you'll get from the apple will be the core," was the quick rejoinder.


Fitz Gerald's reference to the "dusky" stable hands suggests the term's origin may lie in African-American culture. Support for this is found in the Chicago Defender
Chicago Defender
The Chicago Defender is a Chicago based newspaper founded in 1905 by an African American for primarily African American readers.In just three years from 1919–1922 the Defender also attracted the writing talents of Langston Hughes and Gwendolyn Brooks....
, an African-American newspaper that had a national circulation. “Ragtime” Billy Tucker, a vaudeville/ragtime performer and writer for the Defender, there used "big apple" to refer to New York in a non-horse-racing context on September 16, 1922:

I trust your trip to 'the big apple' (New York) was a huge success and only wish that I had been able to make it with you.

Tucker had earlier used "Big Apple" as a reference to a different city, Los Angeles. This example, from May 15, 1920, is the earliest known use of "Big Apple" to refer to any city. It is possible that the writer simply understood "Big Apple" as an appropriate nickname for any large city:

Dear Pal, Tony: No, Ragtime Billy Tucker hasn't dropped completely out of existence, but is still in the 'Big Apple', Los Angeles.

By the late 1920s, New York writers other than Fitz Gerald were starting to use "Big Apple" and were using it outside of a horse-racing context. "The Big Apple" was a popular song and dance
Big Apple (dance)
The Big Apple is both a partner dance and a circle dance that originated in the Afro-American community of the United States in the beginning of the 20th century.- Origin :...
in the 1930s. Walter Winchell
Walter Winchell
Walter Winchell was an American newspaper and radio gossip commentator.-Professional career:Born Walter Weinschel in New York City, he left school in the sixth grade and started performing in a vaudeville troupe known as Gus Edwards' "Newsboys Sextet."His career in journalism was begun by posting...
and other writers continued to use the name in the 1940s and 1950s.

By the 1960s, "the Big Apple" was known only as an old name for New York. In the early 1970s, however, the New York Convention and Visitors Bureau (now NYC & Company, the official marketing and tourism organization for New York City), under the leadership of its president, Charles Gillett, began promoting "the Big Apple" for the city. It has remained popular since then. Mayor Rudolph W. Giuliani in 1997 signed legislation designating the southwest corner of West 54th Street
54th Street (Manhattan)
54th Street is a two-mile-long, one-way street traveling west to east across Midtown Manhattan.-West Side Highway:*The route begins at the West Side Highway . Opposite the intersection is the New York Passenger Ship Terminal and the Hudson River...
and Broadway, the corner on which John J. Fitz Gerald lived from 1934 to 1963, as "Big Apple Corner."

The New York Mets
New York Mets
The New York Mets are a professional baseball team based in the borough of Queens in New York City, New York. They belong to Major League Baseball's National League East Division. One of baseball's first expansion teams, the Mets were founded in 1962 to replace New York's departed National League...
have featured a "Home Run Apple" that rises whenever a Mets player hits a home run. It has become a symbol of the Mets baseball team, recognized throughout the league as an iconic feature of the Mets' stadiums. It first appeared in Shea Stadium
Shea Stadium
William A. Shea Municipal Stadium, usually shortened to Shea Stadium or just Shea , was a stadium in the New York City borough of Queens, in Flushing Meadows–Corona Park. It was the home baseball park of Major League Baseball's New York Mets from 1964 to 2008...
, and the original can still be seen on display at Citi Field, outside the Jackie Robinson Rotunda. Citifield now uses a new apple, one that is nearly four times the size of the original.

In Evita, Buenos Aires
Buenos Aires
Buenos Aires is the capital and largest city of Argentina, and the second-largest metropolitan area in South America, after São Paulo. It is located on the western shore of the estuary of the Río de la Plata, on the southeastern coast of the South American continent...
is referred to as "B.A., Buenos Aires, Big Apple" in the song Eva, Beware of the City. This reference was invented by lyricist Tim Rice
Tim Rice
Sir Timothy Miles Bindon "Tim" Rice is an British lyricist and author.An Academy Award, Golden Globe Award, Tony Award and Grammy Award-winning lyricist, Rice is best known for his collaborations with Andrew Lloyd Webber, with whom he wrote Joseph and the Amazing Technicolor Dreamcoat, Jesus...
and does not reflect preexisting use.