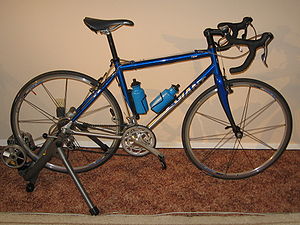 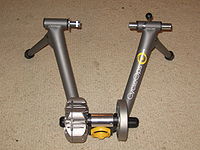 A trainer, or turbo trainer, is a piece of equipment that makes it possible to ride a bicycle
Bicycle
A bicycle, also known as a bike, pushbike or cycle, is a human-powered, pedal-driven, single-track vehicle, having two wheels attached to a frame, one behind the other. A person who rides a bicycle is called a cyclist, or bicyclist....
while it remains stationary. They are commonly used to train for races, or when riding conditions outside are not favorable. Using a trainer indoors allows the rider to perform other activities while riding, such as watching TV, without risk of injury.

A trainer consists of a frame, a clamp to hold the bicycle securely, a roller that presses up against the rear wheel, and a mechanism that provides resistance when the pedals are turned. In a wind trainer, the roller drives fan blades that create air resistance. These are typically the least expensive and noisiest trainers. Magnetic trainers have magnet
Magnet
A magnet is a material or object that produces a magnetic field. This magnetic field is invisible but is responsible for the most notable property of a magnet: a force that pulls on other ferromagnetic materials, such as iron, and attracts or repels other magnets.A permanent magnet is an object...
s that resist each other, and are moderately expensive and moderately noisy. Some magnetic trainers have handlebar-mounted control boxes to change the level of resistance during a training session. Fluid trainers use liquid-filled chambers to create resistance. They are the most expensive and quietest trainers. A small number of trainers use a centrifugal pressure mechanism to create resistance, involving pressure plates, ball bearings and specially shaped grooves. These are similar to fluid trainers in price and performance.

Trainers make it possible to build bicycle skills and power very efficiently in a highly controlled environment, without the unavoidable interruptions of outdoor riding. For instance, in hill training, instead of being limited to whatever hills are around one's home, one can simulate any size and steepness. Trainers provide better preparation for racing than stationary bicycles. Trainers require better technique than stationary bicycles, and they provide a more realistic-feeling ride. The geometry and resulting body position of a stationary bicycle may be significantly different from a racing bike; of course, if one uses the racing bike itself in an indoor trainer, the body position is nearly identical.

Some trainers are equipped with sensors that monitor the rider's performance. Power output, cadence, virtual speed and heart rate are among the metrics that can be transmitted electronically. Analyzing these figures can help to fine-tune the athlete's training.

Bicycle trainers are categorized by how the unit provides resistance.


Usually all trainers can be adjusted for most sizes of road and mountain bikes. However, knobby tires can cause vibration and noise, defeating the purpose of noiseless units.