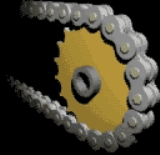 Overview
A bicycle chain is a roller chain
Roller chain
Roller chain or bush roller chain is the type of chain drive most commonly used for transmission of mechanical power on many kinds of domestic, industrial and agricultural machinery, including conveyors, wire and tube drawing machines, printing presses, cars, motorcycles, and simple machines like...
that transfers power
Power (physics)
In physics, power is the rate at which energy is transferred, used, or transformed. For example, the rate at which a light bulb transforms electrical energy into heat and light is measured in watts—the more wattage, the more power, or equivalently the more electrical energy is used per unit...
from the pedal
Bicycle pedal
A bicycle pedal is the part of a bicycle that the rider pushes with their foot to propel the bicycle. It provides the connection between the cyclist's foot or shoe and the crank allowing the leg to turn the bottom bracket spindle and propel the bicycle's wheels...
s to the drive-wheel
Bicycle wheel
A bicycle wheel is a wheel, most commonly a wire wheel, designed for bicycle. A pair is often called a wheelset, especially in the context of ready built "off the shelf" performance-oriented wheels....
of a bicycle
Bicycle
A bicycle, also known as a bike, pushbike or cycle, is a human-powered, pedal-driven, single-track vehicle, having two wheels attached to a frame, one behind the other. A person who rides a bicycle is called a cyclist, or bicyclist....
, thus propelling it. Most bicycle chains are made from plain carbon
Steel
Steel is an alloy that consists mostly of iron and has a carbon content between 0.2% and 2.1% by weight, depending on the grade. Carbon is the most common alloying material for iron, but various other alloying elements are used, such as manganese, chromium, vanadium, and tungsten...
or alloy steel, but some are nickel-plated to prevent rust, or simply for aesthetics. Nickel also confers a measure of self-lubrication to a chain's moving parts. Nickel is a relatively non-galling metal.
Obsolete chain designs previously used on bicycles included the block chain
Block chain
A block chain, also called a "bar-link" or "block-and-bar" chain, is a mechanical drive chain. It is composed of side plates, where each plate straddles one end of a block and is connected to the block with a pin going through a hole at one end of the block...
, the skip-link chain
Skip-link chain
Skip-link chain is an obsolete roller chain for bicycles in which side plates are alternately short and long, and so rollers are alternately close together and far apart....
, and the Simpson lever chain
Simpson Chain
The Simpson Chain or Simpson Lever Chain was an English-made bicycle chain invented by William Spears Simpson in 1895. The design departed from the standard roller bicycle chain: it was composed of linked triangles forming two levels. The inner level was driven by the chainring and the outer drove...
.

When was the bicycle chain invented by the chinese?
More
x