Biak is serviced by Frans Kaisiepo Airport
Frans Kaisiepo Airport
-History:Mokmer Airfield was part of a complex of airfields built on Biak Island by the Japanese , of which Mokmer was the main USAAF facility after the island was taken by the United States after fierce fighting in late May and June 1944....
, which has flights from all over Indonesia.

Space satellite
Satellite
In the context of spaceflight, a satellite is an object which has been placed into orbit by human endeavour. Such objects are sometimes called artificial satellites to distinguish them from natural satellites such as the Moon....
launch services will begin to be offered in 2011 at the new Biak Spaceport. The equator
Equator
An equator is the intersection of a sphere's surface with the plane perpendicular to the sphere's axis of rotation and containing the sphere's center of mass....
ial location offers particularly efficient launches to equatorial and near-equatorial orbits
Near equatorial orbit
A near-equatorial orbit is an orbit that lies close to the equatorial plane of the object orbited. This orbit allows for rapid revisit times of near-equatorial ground sites.- See also :* List of orbits...
.

The Biak Numfor culture revolves around their ancient animist religion, although today they are Christian as well.

Their beliefs revolve around a ritual ceremony called Wor, where they will be plagued by all kinds of bad luck and sickness. The Wor is in all aspect of their life and some of their traditional ceremonies are still being held now. They include the first hair cut ceremony (Wor Kapapnik), the growing up ceremony (Wor Famarmar) and the Wedding ceremony (Wor Yakyaker Farbakbuk). All of these ceremonies are accompanied by singing, dancing and offering to ancestral spirits.

The Biak Numfor have a friendship dance called "Yosim Pancar". It's small to mid-size dance group formations which could last all-night long. Several "Yosim Pancar" moves that are popular till this day are: Pancar Gas, Gale-Gale, Jef, Pacul Tiga, Seka, and Poco-poco adaptation.

The rhythm and song of Yosim Pancar dance are now being modernized with special effect sounds and pop dance beat. Originally the rhythm is to summon ancestal spirits and let them join the group. The traditional musical instrument of this dance is a selfmade stringbass from coconut tree and roots which is similar to the guitar or ukulele. 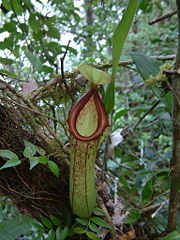 The rain forest-covered Biak Islands have been designated the Biak-Numfoor rain forests, especially as they have the largest number of endemic bird species of any single area in the New Guinea region.

There are numerous types of flora in the tropical rain forest of the island, including a variety of trees and other commercially important species plus the lush vegetation of mangrove swamps.
The source of this article is wikipedia, the free encyclopedia.  The text of this article is licensed under the GFDL.