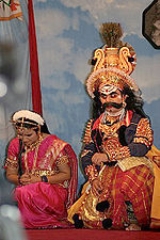 His legendary prowess is celebrated in the epic: "Of all the wielders of the mace, there is none equal to Bhima; and there is none also who is so skillful a rider of elephants. In fight, they say, he yields not even to Arjuna; and as to might of arms, he is equal to sixty elephants.