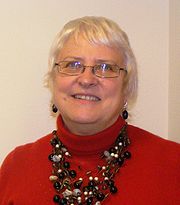 Dame Janet Elizabeth Murray "Betty" Kershaw, DBE
Order of the British Empire
The Most Excellent Order of the British Empire is an order of chivalry established on 4 June 1917 by George V of the United Kingdom. The Order comprises five classes in civil and military divisions...
, FRCN
Royal College of Nursing
The Royal College of Nursing is a union membership organisation with over 395,000 members in the United Kingdom. It was founded in 1916, receiving its Royal Charter in 1928, Queen Elizabeth II is the patron...
, CStJ
Venerable Order of Saint John
The Most Venerable Order of the Hospital of Saint John of Jerusalem , is a royal order of chivalry established in 1831 and found today throughout the Commonwealth of Nations, Hong Kong, Ireland and the United States of America, with the world-wide mission "to prevent and relieve sickness and...
, née Gammie (born 11 December 1943), was Professor of Nursing
Nursing
Nursing is a healthcare profession focused on the care of individuals, families, and communities so they may attain, maintain, or recover optimal health and quality of life from conception to death....
and Dean at the School of Nursing and Midwifery, University of Sheffield
University of Sheffield
The University of Sheffield is a research university based in the city of Sheffield in South Yorkshire, England. It is one of the original 'red brick' universities and is a member of the Russell Group of leading research intensive universities...
from 1999 to 2006.

She served as Head of the Manchester College of Midwifery and the Director of Nursing Education at the Stockport, Tameside and Glossop College of Nursing.

Kershaw received an honorary doctorate from Manchester University in 1995 in recognition of her contribution to nursing education. Professor Kershaw was created Dame Commander of the Order of the British Empire in 1998 for services to nursing education. Her recent international consultancy work includes projects in Colombia and China on the modernization agenda for nursing. She has ongoing commitments to the Department of Health Leadership Project including advising on how the program develops black nurses for leadership positions.

She lives in Manchester
Manchester
Manchester is a city and metropolitan borough in Greater Manchester, England. According to the Office for National Statistics, the 2010 mid-year population estimate for Manchester was 498,800. Manchester lies within one of the UK's largest metropolitan areas, the metropolitan county of Greater...
and is married to historian Sir Ian Kershaw
Ian Kershaw
Sir Ian Kershaw is a British historian of 20th-century Germany whose work has chiefly focused on the period of the Third Reich...
, with whom she has two sons.
The source of this article is wikipedia, the free encyclopedia.  The text of this article is licensed under the GFDL.