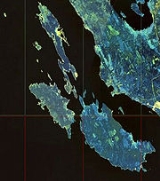 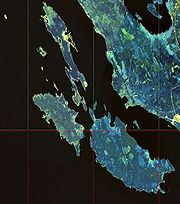 Beryozovye Islands alternatively spelled Berezovye Islands, is an island group in Leningrad Oblast
Leningrad Oblast
Leningrad Oblast is a federal subject of Russia . It was established on August 1, 1927, although it was not until 1946 that the oblast's borders had been mostly settled in their present position...
, Russia
Russia
Russia or , officially known as both Russia and the Russian Federation , is a country in northern Eurasia. It is a federal semi-presidential republic, comprising 83 federal subjects...
. The islands are situated at the bottom of the Gulf of Finland
Gulf of Finland
The Gulf of Finland is the easternmost arm of the Baltic Sea. It extends between Finland and Estonia all the way to Saint Petersburg in Russia, where the river Neva drains into it. Other major cities around the gulf include Helsinki and Tallinn...
, just outside the town of Primorsk
Primorsk
Primorsk may refer to:*Dənizkənarı, Azerbaijan - formerly Primorsk*Primorsk, Leningrad Oblast, a town in Leningrad Oblast, Russia, formerly Koivisto or Björkö...
on the Karelian Isthmus
Karelian Isthmus
The Karelian Isthmus is the approximately 45–110 km wide stretch of land, situated between the Gulf of Finland and Lake Ladoga in northwestern Russia, to the north of the River Neva . Its northwestern boundary is the relatively narrow area between the Bay of Vyborg and Lake Ladoga...
.

Before the third Swedish crusade
Third Swedish Crusade
The Third Swedish Crusade was a Swedish military expedition to Karelia in 1293, an area controlled by Novgorod. As the result of the attack, Viborg Castle was established and western Karelia remained under Swedish rule for over 400 years....
, the islands paid tax to Novgorod whereupon they became Swedish. In 1721 they became part of Russia, and in 1812 they were restored to the Grand Duchy of Finland
Grand Duchy of Finland
The Grand Duchy of Finland was the predecessor state of modern Finland. It existed 1809–1917 as part of the Russian Empire and was ruled by the Russian czar as Grand Prince.- History :...
with the county of Viborg
Viborg
Viborg may refer to:*Viborg, Denmark, a city in Jutland, Denmark**Viborg Municipality, a Danish municipality named for the city**Viborg County, a former county of Denmark**Diocese of Viborg**Viborg FF, a professional football team based in Viborg...
. In the independent Finland
Finland
Finland , officially the Republic of Finland, is a Nordic country situated in the Fennoscandian region of Northern Europe. It is bordered by Sweden in the west, Norway in the north and Russia in the east, while Estonia lies to its south across the Gulf of Finland.Around 5.4 million people reside...
they belonged to a commune then called Koivisto
Primorsk
Primorsk may refer to:*Dənizkənarı, Azerbaijan - formerly Primorsk*Primorsk, Leningrad Oblast, a town in Leningrad Oblast, Russia, formerly Koivisto or Björkö...
(Swedish: Björkö). The main settlement on the islands was then called Saarenpää (Krasnoostrovskiy). After WWII, they were ceded by Finland to the Soviet Union
Soviet Union
The Soviet Union , officially the Union of Soviet Socialist Republics , was a constitutionally socialist state that existed in Eurasia between 1922 and 1991....
.