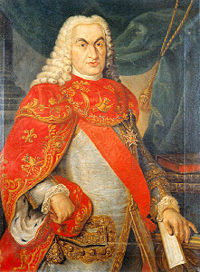 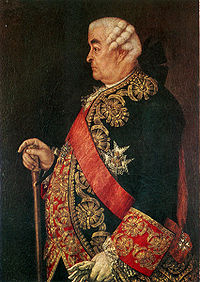 Born of a poor family in Stia
Stia
Stia is a comune in the Province of Arezzo in the Italian region Tuscany, located about 40 km east of Florence and about 40 km northwest of Arezzo. The village of Stia is often called the "source of the Arno", although the real source is some 1200 metres higher up on the slopes of Monte...
, near Arezzo
Arezzo
Arezzo is a city and comune in Central Italy, capital of the province of the same name, located in Tuscany. Arezzo is about 80 km southeast of Florence, at an elevation of 296 m above sea level. In 2011 the population was about 100,000....
(Tuscany
Tuscany
Tuscany is a region in Italy. It has an area of about 23,000 square kilometres and a population of about 3.75 million inhabitants. The regional capital is Florence ....
), Tanucci was educated, thanks to a patron, at the University of Pisa
University of Pisa
The University of Pisa , located in Pisa, Tuscany, is one of the oldest universities in Italy. It was formally founded on September 3, 1343 by an edict of Pope Clement VI, although there had been lectures on law in Pisa since the 11th century...
. Tanucci was appointed a professor of law there in 1725 and attracted attention by his defence of the authenticity of the Codex Pisanus of the Pandects
Pandects
The Digest, also known as the Pandects , is a name given to a compendium or digest of Roman law compiled by order of the emperor Justinian I in the 6th century .The Digest was one part of the Corpus Juris Civilis, the body of civil law issued under Justinian I...
of Justinian. When Charles, Duke of Parma
Charles III of Spain
Charles III was the King of Spain and the Spanish Indies from 1759 to 1788. He was the eldest son of Philip V of Spain and his second wife, the Princess Elisabeth Farnese...
, son of Philip V of Spain
Philip V of Spain
Philip V was King of Spain from 15 November 1700 to 15 January 1724, when he abdicated in favor of his son Louis, and from 6 September 1724, when he assumed the throne again upon his son's death, to his death.Before his reign, Philip occupied an exalted place in the royal family of France as a...
, passed through Tuscany on his way to conquer the Kingdom of Naples, Cosimo III de' Medici, Grand Duke of Tuscany, encouraged him to take Tanucci with him. In Naples Charles appointed him at first councillor of state, then superintendent of posts, minister of justice in 1752, foreign minister in 1754 and finally prime minister and a marquis
Marquis
Marquis is a French and Scottish title of nobility. The English equivalent is Marquess, while in German, it is Markgraf.It may also refer to:Persons:...
.

As prime minister Tanucci was most zealous in establishing the supremacy of a modernized State over the Church, and in abolishing the feudal privileges of Papacy and the nobility in the Kingdom of the Two Sicilies. Governing under the principles of enlightened absolutism
Enlightened absolutism
Enlightened absolutism is a form of absolute monarchy or despotism in which rulers were influenced by the Enlightenment. Enlightened monarchs embraced the principles of the Enlightenment, especially its emphasis upon rationality, and applied them to their territories...
, he restricted the jurisdiction of the bishops, eliminated medieval prerogatives, closed superfluous convents and monasteries and reduced the taxes to be forwarded to the pontifical Curia
Curia
A curia in early Roman times was a subdivision of the people, i.e. more or less a tribe, and with a metonymy it came to mean also the meeting place where the tribe discussed its affairs...
. These progressive innovations were sanctioned in a Concordat signed with the Papacy in 1741, the application of which, however, went far beyond the intentions of the Holy See.

For the reformation of the laws he instituted a commission of learned jurists with instructions to compile a new code, the Codice Caroline, which was, however, not put into force. When Charles of Naples became Charles III of Spain in 1759, Tanucci was made president of the council of regency instituted for the nine-year-old Ferdinand IV, who even when he reached his majority preferred to leave the government in Tanucci's capable hands, constantly overseen from Spain by Charles III.

In foreign affairs, Tanucci kept Naples out of wars and entanglements, though in 1742 an English fleet off the coast helped ensure Neapolitan neutrality in the war between Spain and Austria.

Tanucci worked at establishing for Bourbon Naples the kind of controls over the church that were effected by the Gallican church
Gallican Church
The Gallican Church was the Catholic Church in France from the time of the Declaration of the Clergy of France to that of the Civil Constitution of the Clergy during the French Revolution....
in Bourbon France: revenues of vacant bishoprics and abbeys went to the crown, superfluous convents were suppressed, tithes abolished and the acquisition of new Church property by mortmain
Mortmain
Mortmain is a legal term that means ownership of real estate by a corporation or legal institution that can be transferred or sold in perpetuity; the term is usually used in the context of its prohibition...
was forbidden. Royal assent was required for the publication in Naples of papal bull
Papal bull
A Papal bull is a particular type of letters patent or charter issued by a Pope of the Catholic Church. It is named after the bulla that was appended to the end in order to authenticate it....
s and concessions were no longer considered eternal. The status of Naples as a papal fief, dating from the time of the Hohenstaufen
Hohenstaufen
The House of Hohenstaufen was a dynasty of German kings in the High Middle Ages, lasting from 1138 to 1254. Three of these kings were also crowned Holy Roman Emperor. In 1194 the Hohenstaufens also became Kings of Sicily...
, was denied: the king of Naples served at the pleasure of God only. Appeals to Rome were forbidden without the royal permission. Marriage was declared a civil contract. And by the order of Charles III the Jesuits were suppressed
Suppression of the Jesuits
The Suppression of the Jesuits in the Portuguese Empire, France, the Two Sicilies, Parma and the Spanish Empire by 1767 was a result of a series of political moves rather than a theological controversy. By the brief Dominus ac Redemptor Pope Clement XIV suppressed the Society of Jesus...
and expelled from the Kingdom of Naples in 1767, a move in which Tanucci was in general sympathy with other progressive ministers at the Bourbon courts, as Aranda in Spain, Choiseul
Étienne François, duc de Choiseul
Étienne-François, comte de Stainville, duc de Choiseul was a French military officer, diplomat and statesman. Between 1758 and 1761, and 1766 and 1770, he was Foreign Minister of France and had a strong influence on France's global strategy throughout the period...
in France, du Tillot
Guillaume du Tillot
Léon Guillaume Tillot was a French politician infused with liberal ideals of the Enlightenment, who from 1759 was the minister of the Duchy of Parma under Philip, Duke of Parma and his wife Princess Louise-Élisabeth of France...
in Parma, and also with Pombal in Portugal.

Pope Clement XIII
Pope Clement XIII
Pope Clement XIII , born Carlo della Torre di Rezzonico, was Pope from 16 July 1758 to 2 February 1769....
responded with excommunication, whereupon Tanucci occupied the monasteries at Benevento
Benevento
Benevento is a town and comune of Campania, Italy, capital of the province of Benevento, 50 km northeast of Naples. It is situated on a hill 130 m above sea-level at the confluence of the Calore Irpino and Sabato...
and Pontecorvo
Pontecorvo
Pontecorvo is a town and comune in the province of Frosinone, Lazio, Italy. Its population is 13,400.- History :The village lies under Rocca Guglielma, a medieval fortification perched on an inaccessible spur...
, which were not returned to the Roman Church until after the general dissolution of the Society of Jesus in 1773. The protests of the bishops against many of the new teachings in the schools after the expulsion of the Jesuits were dismissed as invalid. One of the last of his acts (1776) was the abolition of the chinea, that is the annual tribute which the kings of Naples since the time of Charles of Anjou had paid to the pope as sovereign. His unfortunate policy in finance and in regard to the food taxes provoked popular revolutions on several occasions.